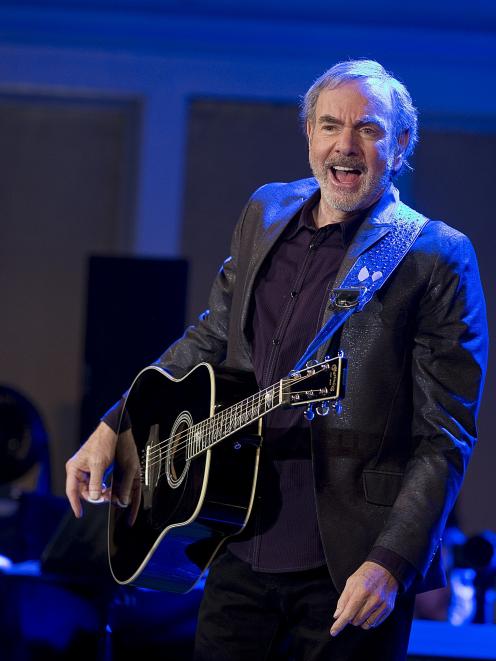 Neil Diamond performs on a TV special in the US earlier this year. Photo by Getty Images.
Forsyth Barr Stadium is set to deliver another major concert with confirmation Neil Diamond is coming to Dunedin.

The Labour Weekend concert will be staged on Saturday, October 24 next year, and is expected to draw thousands of fans to the city for the weekend.

It will be Diamond's only South Island show on the two-stop New Zealand leg of his 2015 world tour. He will also perform at Auckland's Vector Arena, on October 19.

Dunedin Venues Management Ltd chief executive Terry Davies was yesterday celebrating the coup of securing such a ''massive name'' for the city.

''He's an international star. He's a toe-tapper. He's one of those ones that you sing along to his songs.''

''It's great to see the stadium hosting more and more top international acts, which bring visitors and money to the city. This is another world-class performer who I'm sure will draw a wonderful crowd.''

Mr Davies said the show was aimed at an older demographic, but would likely have wider appeal, and a crowd of up to 15,000 was predicted.

''I think our primary market is older, there's no question about that - those who grew up with him.

''But he does appeal across all ages because his songs are so recognisable. They are timeless.''

Up to 60% of the predicted crowd was expected to come from outside the city, and DVML was planning a weekend of stadium activities around the concert to encourage fans to spend an extra night in the city.

As a result, an estimated $7 million was expected to be pumped into the city's economy - making the concert worth almost as much as a sell-out All Blacks test, which generated $8 million, he said.

''It's a big impact for the city. It's a profitable event all round.''

Mr Davies was pleased to add Diamond's name to the growing list of headline acts secured for Dunedin venues in recent months.

Lorde and Broods both performed at the Dunedin Town Hall in recent weeks, followed by Australian rocker Jimmy Barnes this weekend.

Sol3 Mio will perform next March, with the next big stadium act, Rod Stewart, on April 11 next year.

The recent success was something of a turnaround for DVML, which had struggled to secure headline acts after Sir Elton John's sell-out stadium show drew a crowd of 35,000 in 2011.

The drought was finally broken with the arrival of Paul Simon and Aerosmith for stadium concerts in April last year.

Mr Davies said the venue was now proving itself to promoters, resulting in a surge of interest, and more big events were ''absolutely'' on the way.

As a result, DVML now had to be mindful of not saturating the market, and might decline some events in future, he said.

''All the promoters are talking to us now about potential future shows. It's exciting for us because we're now having to pick and choose.

The aim was to stage five sizeable stadium concerts each year - three aimed at an older demographic and two at a younger audience, he said.

The announcement of Neil Diamond's concert comes days after the Dunedin City Council released the findings of its stadium review.

It recommended an extra $1.81 million a year to put DVML's finances on a sustainable footing, lifting the total bill for ratepayers to $11.65 million a year.

Mr Davies said events like the Diamond concert showed what the city received in return.

''It's a clear ethos in the business - we want to deliver value back to the city.

Diamond was being brought to New Zealand by Dainty Group, and securing the show was another sign of the burgeoning relationship between DVML, Dainty and other Australia-based promoters, he said.

Ticket sales for Rod Stewart's show remained a closely guarded secret, with neither DVML nor the show's promoter, Frontier Touring, yet prepared to divulge exact numbers.

However, Mr Davies said sales to date were stronger than had been expected, and predicted that concert would top Diamond's expected crowd of up to 15,000.

That would mean a predicted $10 million cash injection for the Dunedin economy, with about 70% of tickets sold to date bought by people from outside the city, he said.

Diamond was last in New Zealand in 2011, when he played shows in Auckland and Wellington. Next year's show would be his first visit to Dunedin.