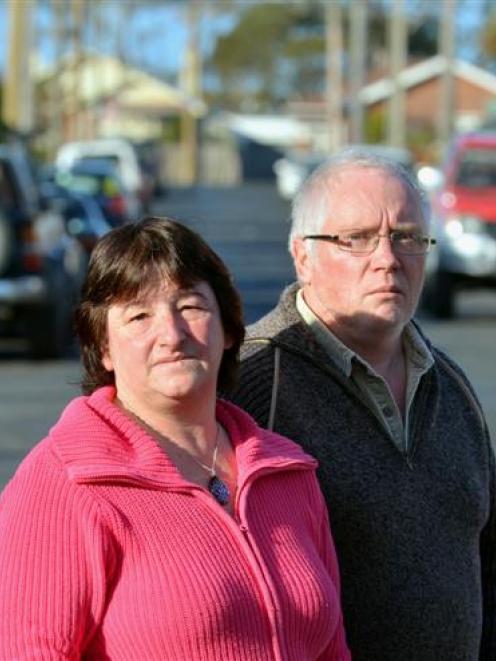 Nelson St residents Bronwyn and Michael Bradshaw. Photo by Gerard O'Brien.
The Dunedin City Council will review the performance of its staff and of contractor Fulton Hogan amid claims a lack of basic maintenance contributed to flooding in South Dunedin.

Some residents - still removing sodden furniture from flood damaged houses after Wednesday's record downpour - yesterday pointed the finger at the council and its contractor.

They claimed essential maintenance of the stormwater network's mud tanks had been overlooked.

Some mud tanks had been left to silt up and others had plants growing inside them, reducing their ability to drain water and contributing to flooding in the area, the residents said.

Their concerns were backed by former DCC drainage and deputy city engineer Trevor Williams, a 34 year council veteran, who contacted the Otago Daily Times to say the system should have performed better than it did.

The fact flooding was so bad, and took up to 24 hours to drain away in some areas, showed the area's mud tanks were blocked, he believed.

''The streets should not have flooded like that after the rain had stopped, if the system was functioning correctly.''

The city had been through a significant event which no system could cope with, and residents' claims were ''a point of discussion and, I suppose, a point of difference'', he said.

''We feel for those residents who have lost things, but at the same time we believe that we're fully compliant with [our] contract.''

He referred all other questions to the council.

Dunedin Mayor Dave Cull said the complaints were a concern and would be investigated as part of a wide ranging ''postmortem'' into last week's flood.

That would include the performance of contractors, as well as council staff, he said.

But Mr Cull yesterday stood by his blunt comments at a media conference on Friday, at which he was asked about residents' concerns that inadequate maintenance had contributed to the flooding.

Nelson St resident Bronwyn Bradshaw told the ODT she had lived in the area for 30 years and had never seen flooding like it.

In that time, regular visits by vacuum trucks, used to clean silt from the mud tanks, had become a thing of the past, she said.

She had not seen any vacuum trucks ''for years and years'' and her calls and those of other residents to the council appeared to have been ignored, she said.

Another resident, from nearby Helena St, contacted the council two weeks ago, after becoming concerned by a blocked mudtank near his house, she said.

The call prompted a contractor to visit and sweep leaves from the grate, before moving on without touching the silt, she said.

A mudtank around the corner from her home was also ''full of mud'' before the flood, while another within metres of her front door had plants growing inside it.

''What does that tell you? If the [mudtank] has been cleaned, why are there plants growing in there?''

Asked if mudtanks should have plants in them, Mr Williams said: ''Plants? Hell, no.''

Henry Kirkwood (77) had lived in the same Nelson St house for 50 years, and said contractors were ''never'' seen in the area anymore.

''They just don't come around. They don't even sweep the street anymore.''

Mr Cull yesterday said he did not know if the latest claims were right or not, but similar complaints had been found to be misguided in the past.

''People have a right to make assertions, but in some cases they've been shown to be confused about what they were talking about.''

Council infrastructure and networks general manager Ruth Stokes said the city's stormwater system had coped ''as well as could be expected'' in the 1 in 100 year flood, ''and that overall appropriate maintenance has been done''.

Staff and contractors had opened manhole covers to check stormwater pipes during the flood, which confirmed they remained ''at capacity'' even as water levels receded, she said.

''Even if there had been minor obstruction issues, they would not have contributed to the overall flooding effect.''

The performance based contract set standards, not the methods used, and Fulton Hogan used inspections to determine tanks in need of attention, he said.

With about 7500 mudtanks to maintain, ''there may occasionally be one which blocks between checks'', but the network responded well overall, he believed.

''Once the rain had stopped, overall the surface water drained away quickly, indicating the system was working well.''