Dunedin gets ready for Earth Hour 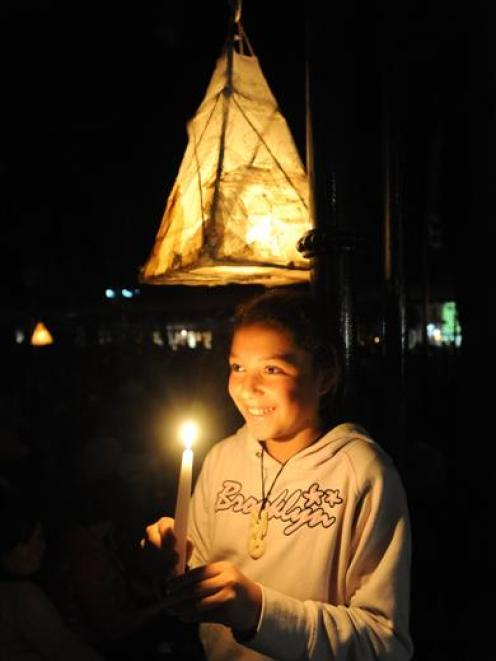 Connor Mullen, of Dunedin, takes part in Earth Hour 2009 activities in the Octagon in March last year. Photo by Peter McIntosh.
With Earth Hour taking place tonight, the Energy Efficiency and Conservation Authority is encouraging people to switch off more than just their lights.

"Watching the lights being turned off across our cities and towns during Earth Hour is a vivid demonstration of how small actions add up to big impacts," he said.

Simple habits such as switching off lights when leaving a room could become second nature and would add up to significant savings on power bills.

If the entire country made it a habit, it would impact greatly on the nation's electricity usage.

Most households could save about $200 a year by switching off lights, towel rails and appliances when not in use.

Nationally, that equated to a potential saving of $320 million each year.

Reduced greenhouse gas emissions, better air quality, and a reduced impact on the environment were all outcomes of good energy use.

Earth Hour started in Sydney in 2007 when lights in 2.2 million homes and businesses were turned off for one hour as people made a stand against climate change.

The following year, 50 million people in 35 countries took part, and last year hundreds of millions of people in 88 countries participated.

Organisers hope 2010 will be even bigger.

For more information about Earth Hour go to www.earthhour.org.nz

- Have a romantic candle-lit dinner with a loved one, or turn it into a dinner party with a group of friends. It will be an excellent chance to dust off your fondue set.
- Rig up a white sheet with candles (at a safe distance) behind it and let your children put on a shadow-puppet show.
- Get outside and make the most of the star gazing opportunity. For those city-slickers, the more lights which are turned off, the brighter the stars will be.
- Work on your story telling abilities by crafting a frightful tale for the family to enjoy. Use a torch for added "scary face" emphasis.
- If the weather is nice plan a bbq. Invite some friends around, set up the deck chairs and fill a bucket with ice to chill drinks.
- Unleash those board games from the back of the cupboard and have a candle-lit games night. It will be a novelty for those children used to being entertained by technology and for those sneaky adults, the dim lighting will hinder people from knowing you are cheating.
- You do not have to stay indoors for the whole hour - have a game of spotlight in the backyard or street.
- Know anyone who is good with a guitar? Get them around for an acoustic session or make the most of your child's music lessons and have them put on a show.
- Light the fire and toast marshmallows.
- Pamper yourself with a long soak in the bath, a facial mask and an hour of silence.
- Take a walk to a look out near you and see what kind of impact Earth Hour has on the vista.
Important: Never leave lit candles unattended and ensure they are fully extinguished when you blow them out.

Dunedin
- The Octagon will host Earth Hour celebrations in Dunedin, and fire performers and drummers will entertain the crowd.
- Organisers expect the Octagon to be bathed in a gentle glow as cafes and bars in the area turn out their lights and give patrons a candle-lit dining experience.
- All other lighting in the area, including street and building lighting, will also be turned off.
- The University of Otago Students Association will show its support by turning off the lights in its main office building and will use social media to raise awareness among its members.
- Also on campus, the University of Otago will turn off lights on the clock tower building and Poppa's Pizzeria will serve candle-lit dinners to its patrons for the evening.

Queenstown
- Queenstown Lakes District Council will hold a community event in Earnslaw Park.
- Local musicians will perform on acoustic guitars, there will be fire-dancing, a sausage sizzle and giveaways.
- Street lighting will be reduced.
- There will be a twilight cinema from 9.30pm with an outdoor screening of The Age of Stupid, a documentary about climate change, starring Pete Postlethwaite.

Alexandra
- The lights on Alexandra's clock on the hill will be switched off for Earth Hour.
- Dunstan High School's Planeteers Group is encouraging Central Otago residents to switch off lights and appliances for the hour.