Goalposts, seats and turf, now it's all up for sale 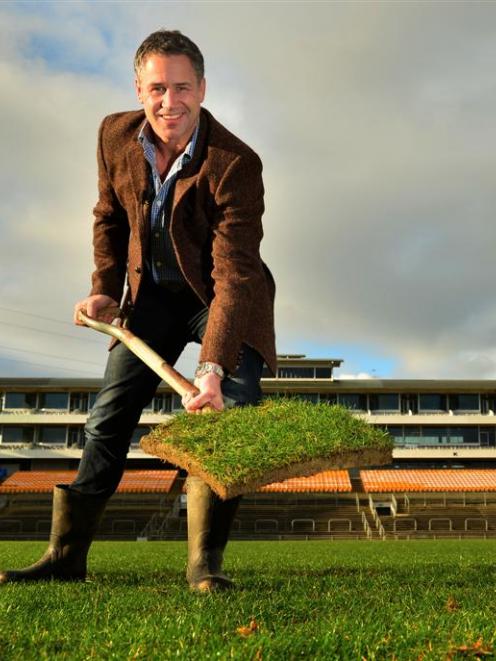 Former Otago rugby player and All Black Marc Ellis claims a piece of turf at Carisbrook yesterday. Photo by Peter McIntosh.
Carisbrook is having a final sellout - and it promises to capture the attention of sports fans in New Zealand and around the world.

Now the main grandstand's days are over, anything that can be unbolted is up for grabs in a massive memorabilia auction.

Items for sale include a pair of goalposts for $10,000, and 400mm by 400mm wooden boxes of hallowed Carisbrook turf delivered anywhere in New Zealand for $100.

More than 8000 plastic and metal seats from the Railway Stand will be sold individually and in sets of up to five for $25 a seat, while the rimu bench seats in the Rose Stand have been turned into garden benches and are available for $500.

''It's a national project and it's too big a job for one club,'' Mr Thorburn said.

''To succeed, we won't be just selling stuff to Dunedin people.

''We've got quite a small window of only about three weeks, because [site developer] Calder Stewart want to move rapidly,'' Mr Thorburn said.

The sale is being fronted by former Otago rugby player and All Black Marc Ellis, who reminisced with All Black and Otago team-mate Josh Kronfeld on their old stomping ground yesterday.

''There are lots of great memories from here,'' Ellis said.

He was also quick to select his own piece of turf.

''Laurie Mains was lining up a tackle bag during practice one day, when John Haggart pulled it away and Laurie face-planted into the cricket pitch block.

''Although Bert Sutcliffe's ashes are around here somewhere, apparently, so some lucky purchaser will probably get the ashes of Bert Sutcliffe.''

''We were lucky enough to play here in the amateur and professional game and Carisbrook saw the transition of that era,'' he said.

The auction opened on Trade Me last night.