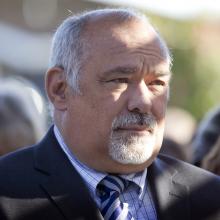 Nigel Murray
Disgraced former health boss Nigel Murray is claiming the credit for merging the Otago and Southland health boards, despite the amalgamation happening after he had moved on.

Mr Scarrott said there would be no further comment "in view of the ongoing investigations''.

Dr Murray resigned from his $560,000 a year post at the WDHB in October amid an expenses scandal and was followed last month by Waikato chairman Bob Simcock.

The southern boards merged on May 1, 2010 - two years and eight months after Dr Murray left Southland for a role in Canada.

As then Southland chief executive, Dr Murray oversaw some moves to increase collaboration between the boards, but at the time dismissed speculation about a merger, saying if that were to happen in the future, it would be a decision for politicians.

Association of Salaried Medical Specialists executive director Ian Powell said Dr Murray "had no role at all in the merger. These moves came after his departure under the leadership of Brian Rousseau who became interim Southland chief executive when [Dr Murray left the Southland board].''

A Waikato DHB spokeswoman refused to comment on the 2014 recruitment process, referring the ODT to Mr Simcock, who could not be contacted.

It emerged yesterday the proposed Waikato Medical School was not the first medical school pushed for by Dr Murray.

He wanted a medical school built in Canada in 2008.

At the time Dr Murray was less than a year into his role with the Fraser Health Authority in British Columbia when he began "preliminary discussions'' with officials at Simon Fraser University and the University of British Columbia.

The proposal never went ahead.

The State Services Commission's investigation into Dr Murray's spending of $218,000 of public money over three years, and Mr Simcock's oversight of Dr Murray's expenses is ongoing.

The Serious Fraud Office (SFO) and the Office of the Auditor-general are making preliminary inquiries into the case.

An official complaint to the SFO about Dr Murray's spending and the WDHB's $18.8million investment into HealthTap - the American company that powers the SmartHealth app - was made on Thursday by former Labour MP Sue Moroney.