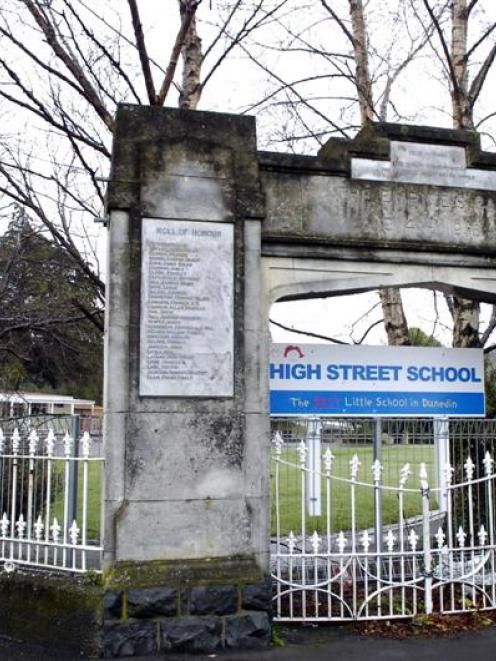 Its board of trustees has officially applied to the Ministry of Education to shut its doors.

The school, established in 1887, will become the fifth primary school in Dunedin to close in the past two years.

Declining rolls led to the amalgamation of Ocean View and Brighton Schools in mid-2008 and the closure this year of Tomahawk, Waldronville and Corstorphine Schools.

High Street School board of trustees chairman Allan Cole said his school had also been hit by declining rolls.

Ministry of Education March roll return statistics showed the school's roll had dropped from 106 pupils in 2006 to 28 this year.

Term four began yesterday with the loss of several more pupils, he said.

In its application, the board indicated it would like to close at the end of this year, but the final decision would be made by the Ministry of Education.

"We're looking for a positive and dignified end to a long chapter in the history of education in Dunedin.

"Obviously, we're very sad that it has to happen, particularly after the enormous amount of effort that current staff, the board of trustees and the local community have been to to keep it open.

"But falling rolls are one of those things we can't control."

The 123-year-old decile 7 school is a year 1-6 contributing school and its pupils come from a wide range of socioeconomic backgrounds.

An Education Review Office report released in July noted the school had experienced significant changes in 2009, with a turnover of teaching staff and the resignation of former principal Sue Riddle.

At the time of the 2010 ERO review, all staff were in relieving positions.

However, since then, acting principal Wendy Mabon had been appointed principal and had been working hard to turn the declining roll around.

ERO had noticed many positive changes in the school since its last review in 2006.

The board, principal and teachers had worked hard to revise and implement the school's curriculum in 2010 and ERO observed good-quality teaching and caring and supportive relationships at the school.

Another review was to be carried out in 2012.

A ministry spokesman confirmed an application for closure had been received.

It was hoped a decision on the school's future could be made before the end of this year, he said.