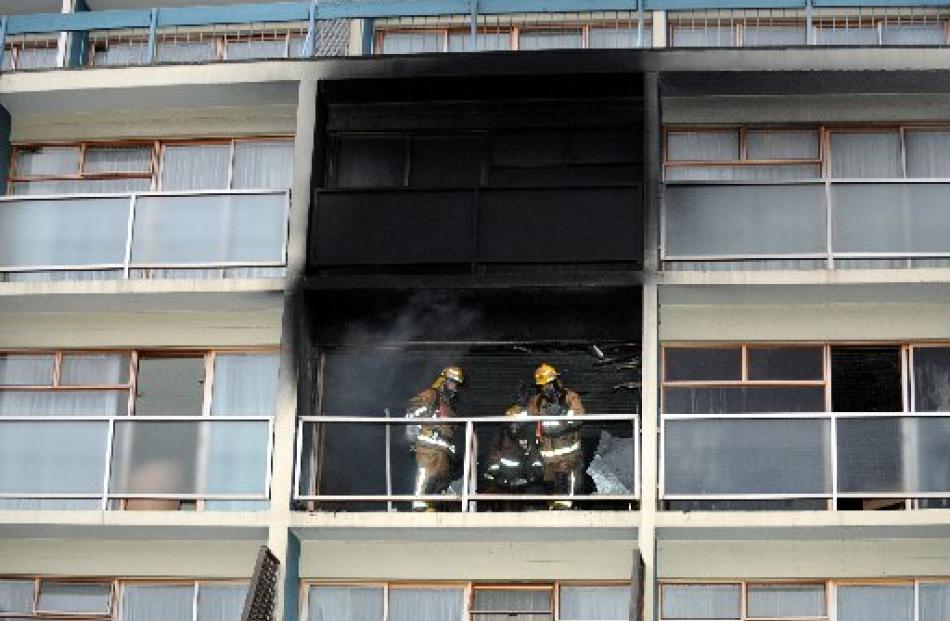 Firefighters with breathing apparatus check the room where a fire broke out on the third floor of the Kingsgate Hotel Dunedin last night. Photos by Stephen Jaquiery 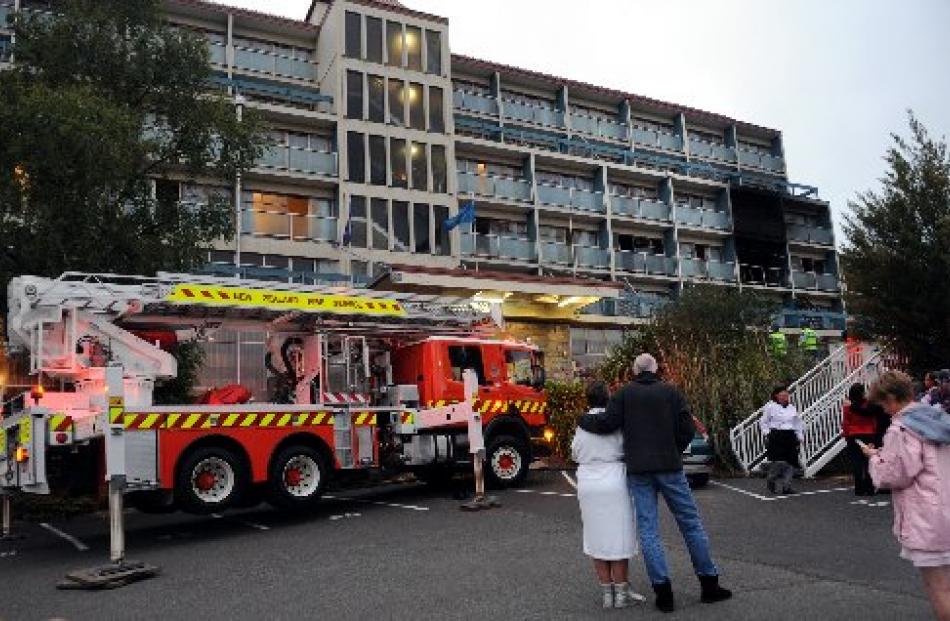 Rose and Dave Stevenson, of Christchurch, watch as firefighters work to dampen down a fire at the Kingsgate Dunedin Hotel. Photos by Stephen Jaquiery 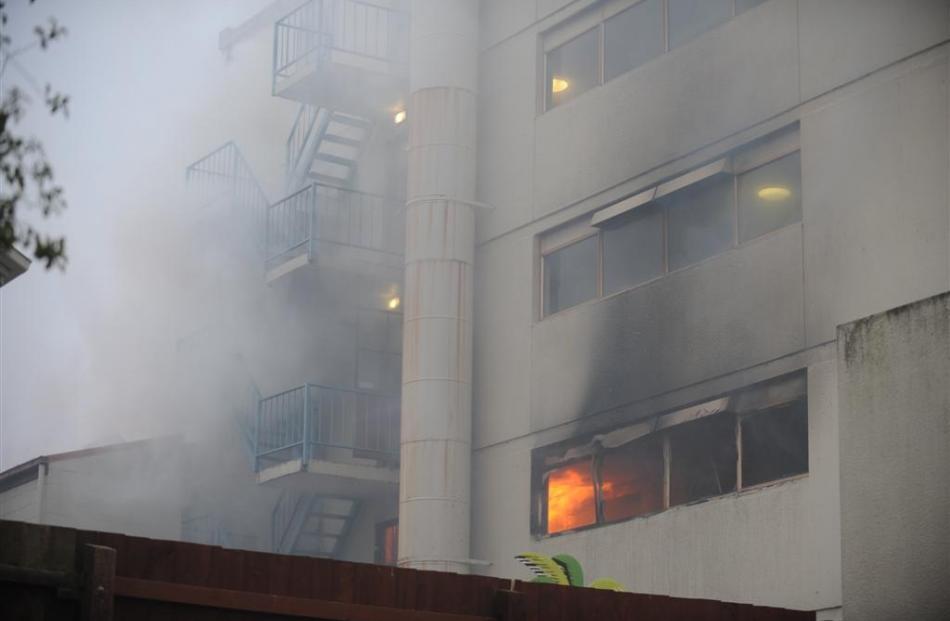 Smoke and flames from the fire. Photos by Stephen Jaquiery 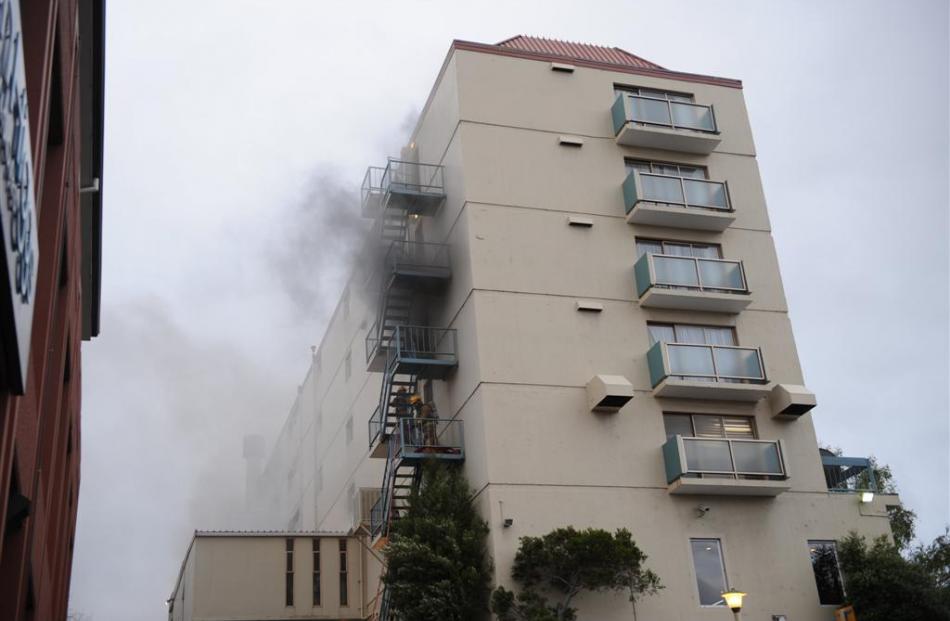 Smoke pours from the hotel. Photos by Stephen Jaquiery 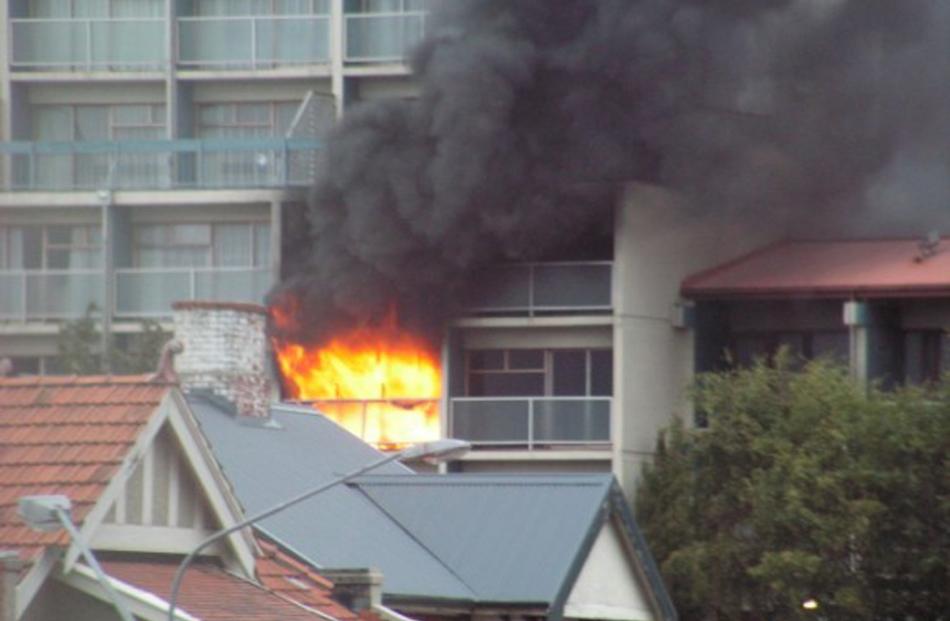 Flames erupt from the third-floor room. Photo by David Winter

A sleeping teenager was rescued by a friend after a fire which forced guests and staff to flee broke out in a major Dunedin hotel last night.

The Fire Service was called to the Kingsgate Hotel in Smith St, at 8.30pm after a smoke alarm was activated by a fire on the third floor of the 55-room hotel.

The room in which the fire started was believed to be vacant at the time.

Oblivious to the drama unfolding around him, Braydon Duggan (17), of Nelson, was asleep in a second-floor room near the fire.

His friend, Che Mantell (19), scaled the wall of the hotel after repeated cellphone calls failed to rouse his friend - "he was out to it, eh".

Mr Duggan later said he wanted to return to his room because he was concerned about his possessions.

Lesley Eichblatt, of Auckland, had just stepped out of the shower when she and her husband Rainer heard the smoke alarms sound in their room on the second floor.

"We got out to the corridor down to the end by the exit, opened the fire door and the foyer was full of black smoke," she said.

"We were horrified to come across the black smoke."

One hotel guest was treated at the scene for smoke inhalation, but there were no other reports of injury.

Senior Sergeant Mel Aitken said last night the fire was not being treated as suspicious at this stage.

"Initially, we had five persons reported missing, but we are certain they are out."

It is understood the hotel would remain vacant overnight.

About 30 guests were being accommodated elsewhere, police said.

Fire investigators began examining the room last night, but it was too soon to say what caused the blaze, which at its peak was attended by eight fire appliances and dozens of firefighters, he said.

He confirmed the hotel had neither water-sprinkler system nor cooking facilities in guests' rooms.

Firefighters worked at the scene late last night, examining the ventilation system as a precaution.

The three-and-a-half-star hotel, which was recently refurbished, sustained extensive smoke and heat damage, with staff working to reassure guests concerned about their possessions and their accommodation. The acting manager of the hotel declined to make any comment last night.

Watching firefighters douse the flames was guest Rose Stevenson, of Christchurch, who was dressed in a bathrobe.

She was in the bath when the alarm sounded.

Her husband, Dave, said the couple assumed it was a false alarm but were shocked to see smoke coming from the rear fire escape, and thought "this doesn't look too good".

"We closed that fire escape door and went down the other end and got out."

A touring Indian couple, who were staying in the room above the fire, said they were concerned their possessions would be ruined just days before they were due to leave the country.

Attracted by the smoke billowing around the city and the large number of emergency services at the central Dunedin site, hundreds of inner-city residents watched the drama unfold next to stunned staff and guests.