Hotel plan could go to round three 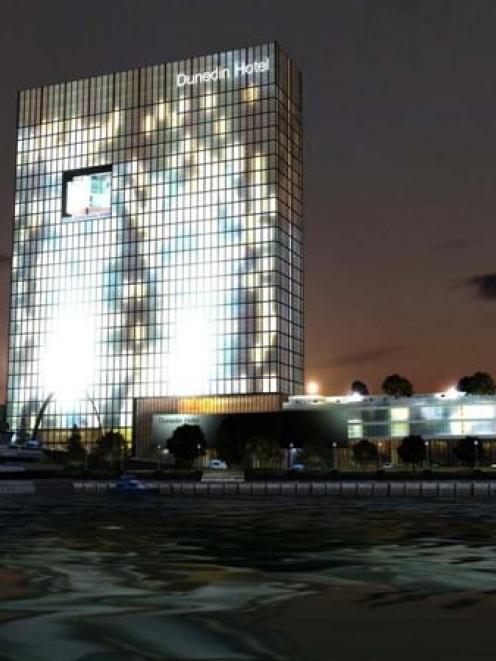 A graphic of the proposed Waterfront Hotel. Photo supplied.
Debate over plans for a $100 million waterfront hotel in Dunedin could be heading for a third round of public consultation.

Cr Weatherall said the committee would meet privately this morning to consider its position, including further information needed before a decision could be made.

That could see a request for more information from Betterways - which has already only partly complied with an earlier request - when the hearing resumed at 2pm today.

The committee would also decide whether any information requested was so significant submitters would need to be invited to have another say, he said.

''The rules are quite clear. We will consider whether it needs further public input,'' Cr Weatherall said.

The move came as council staff and consultants spent much of yesterday reviewing their original positions on the hotel, based on evidence heard to date.

Many reiterated concerns about the project, including council planner Lianne Darby, who maintained her original recommendation that consent should be declined.

However, Betterways' representatives also suggested the design of the hotel had been ''misunderstood'' and would be improved when plans for the glass facade were considered by a design review panel.

Similar treatments could yet help lift the appearance of the proposed Dunedin hotel, including either reducing or enhancing its perceived height, he said.

''I think with the first design, people don't understand what could be achieved with the use of a glazed hotel wall.

''The first design is perhaps misunderstood in terms of ... how the building would come together,'' he said.

One consent condition suggested so far was to send the design to the review panel for final approval, and Mr Whelan yesterday presented a decision ''matrix'' the committee could use to indicate desired finishes.

Committee member Cr Kate Wilson said she wanted to ''express a frustration'' the images presented yesterday had not been made public earlier, believing they could have prompted a different public reaction.

Mr Whelan said he would talk to Betterways about preparing new images showing in more detail what the hotel could look like when treated in a similar way.

Earlier, Ms Darby was among council staff to reiterate concerns about the hotel, saying some effects arising from the hotel had been addressed, including a shortage of on-site parking.

However, other problems remained, including the hotel's height and the absence of a pedestrian bridge linking the hotel, central city and harbourside, she believed.

Concept plans for a bridge were unveiled by Betterways late last year, but had not been included in its consent application, and there was no agreement on the cost, who would pay, or when it would be built.

Ms Darby said it would be ''a different proposal with a bridge'', but the committee had to consider the application in front of it.

Ian Munro, the council's consulting urban planner and designer, of Urbanism Plus, also believed consent should be declined unless a bridge was part of the project.

He believed the hotel's height was not an issue, as it could only be assumed the absence of district plan restrictions on height and the disruption of views for the industrial zone was deliberate.

That meant ''significant development'' of the area was anticipated, and, although he agreed with many arguments against the hotel's height and bulk, they could not be supported.

Instead, the absence of an appropriate bridge linking the hotel, central city and harbourside was a key issue, he argued.

The hotel would boost pedestrian traffic and spending in the CBD, but only with the bridge, and without it the hotel would be contrary to the district plan.

Noise could also remain an issue for the hotel, despite Betterways' willingness to accept a ''no complaints'' covenant covering hotel guests and apartment dwellers.

Council senior environmental officer Wayne Boss, addressing the hearing, said construction noises could be managed, but ''impact noise'' from shunting at KiwiRail's nearby yard would be louder and more problematic.

The council would have to investigate if guests or tenants complained, and council environmental health officer Carlo Bell said the health implications of disrupted sleep meant any covenant would be ''quite irrelevant''.