Houses to make way for motorway 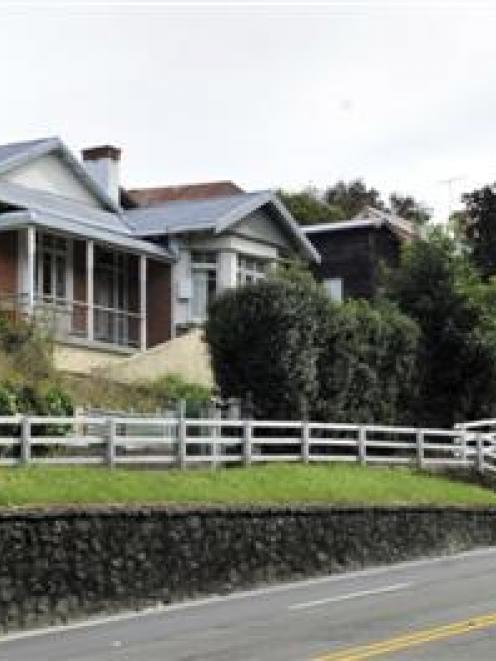 These houses may be removed from Caversham Valley Rd to tidy the area in time for the Rugby World Cup in September. Photo by Gerard O'Brien.
Dunedin's Rugby World Cup spruce-up could include the removal of 25 homes and some tenants might be required to leave.

The New Zealand Transport Agency is considering the early demolition of the houses it owns alongside Caversham Valley Rd in time for the Rugby World Cup.

The homes were to be removed anyway, as well as others in the area yet to be bought by the agency, when work begins on stage two of the $49 million project to widen the Caversham highway to four lanes.

NZTA project manager Simon Underwood yesterday confirmed plans to remove the homes - to tidy the area in time for the global rugby event - would be discussed with Dunedin City Council staff.

"Whether we remove them sooner, or closer to the time of the works, is something we're considering at the moment," he said.

His comments came after Cr Teresa Stevenson, speaking at this week's infrastructure services committee meeting, asked Mr Underwood to consider demolishing the homes before the arrival of international visitors for the tournament.

She said it was important to consider the "amenity" of the city for the tournament, to make the city "as tidy as possible".

Mr Underwood told the Otago Daily Times the houses owned by the agency were beside the road, between Burnett and Aberfeldy Sts.

Some were still occupied by tenants on short-term leases, but others were vacant and costing the agency money, he said.

The houses were closely monitored by a security agency, but had been targeted by vandals in the past, he said.

One of the empty homes was also considered a health and safety risk, after being damaged in a fire, and was likely to be removed within "a couple" of months, he said.

"Whether we remove the rest of the houses sooner rather than later - we have got to think about what's the best thing to do in terms of the overall appearance."

It was not yet known when the fate of the other homes would be decided, but Mr Underwood believed there was still time to remove them before the world cup matches.

Under existing plans, the homes were to be removed as part of stage two of the widening project, which was expected to begin sometime between June and August next year and take two years to complete.

The agency expected to buy more homes in the area to make way for the highway, and those owners had been consulted but not yet formally approached about purchase plans, he said.

However, it was also not yet clear whether removing the homes, and leaving behind vacant lots, would improve the area, he said.

Landscaping planned as part of the highway project was not expected to take place until work was completed in 2014, he said.

"Some of those houses are empty [and] because they're empty, I guess they are looking unkempt.

"But removing them doesn't leave a tidy site behind. Instead of an unkempt house, you could end up with an unkempt vacant section, which is not necessarily any more visually pleasing."

He declined to say exactly how many of the 25 homes were occupied, or which one was to be demolished because of health and safety fears.