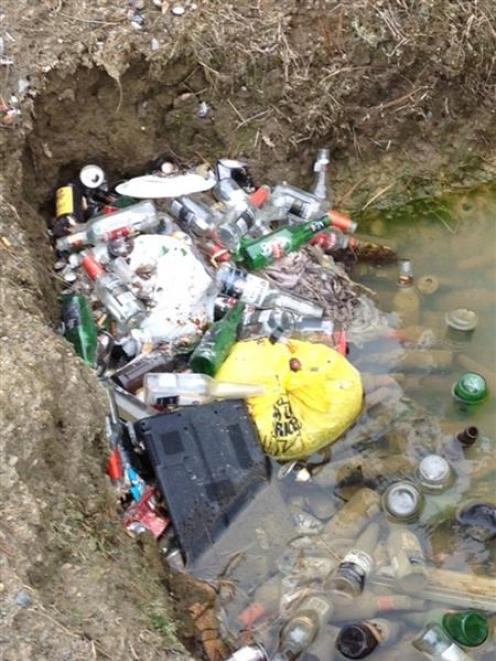 Bottles and general rubbish lie on the side of Flagstaff-Whare Flat Rd, Dunedin, on Saturday. Photo by Hamish McNeilly.
Whoever is dumping whiteware, animal carcasses and other rubbish in Dunedin's quiet corners needs to take ''a bit of a look at themselves'', a Dunedin community board chairman says.

Scott Weatherall, chairman of the Saddle Hill Community Board, made the comment following the dumping of more rubbish around the city in recent weeks.

That included a chest freezer and other whiteware left amid piles of bottles and bags of rubbish beside Flagstaff-Whare Flat Rd over the weekend.

Mr Weatherall said he had also noticed a ''huge amount'' of rubbish dumped in his board's area, including along Big Stone Rd, south of Brighton, in recent days.

The practice appeared to be increasing again, which could be due to charges at the Green Island landfill, and Flagstaff's proximity meant it was quicker to drive there than to the city's landfill, he said.

''Some people are just slack and lazy and they just need to have a bit of a look at themselves.

''I will certainly be in touch with the council and we will see what we can do to get it cleaned up,'' he said.

The latest incidents came after concerns were raised about illegal dumping in January, amid a public outcry over charges to the way fees were charged at the Green Island landfill.

Cr David Benson-Pope, speaking last week, also criticised the way the contract to clean the inner city was being carried out.

A Dunedin City Council spokeswoman, contacted late yesterday, said illegal dumping remained an ''ongoing issue'' in the Flagstaff-Whare Flat Rd area, but was not aware of any city-wide increase in the practice.

The problem was taken seriously, followed up ''where possible'', and ''we encourage people who see anyone dumping rubbish illegally to contact the DCC with details, such as the vehicle registration plates,'' she said.