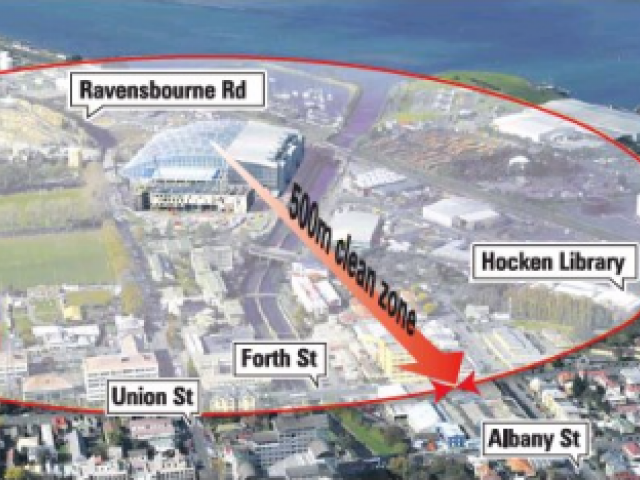 The Kiwi tradition of a sausage sizzle to raise money for a junior rugby team will have to make way for the marketing rights of big business during the Rugby World Cup - at least in an exclusive 500m "clean zone" around the Forsyth Barr Stadium.

The stadium, of course, will be temporarily called the Otago Stadium for the event.

But the Dunedin City Council has promised, despite the rules it will have to enforce, suitable places will be found for those sorts of activities.

Mayor Dave Cull last night said Dunedin was bound to work within the host region agreement the city signed with Rugby New Zealand 2011, and had to "optimise" the situation.

Council marketing and communications agency manager Debra Simes gave the Otago Daily Times a run-down of the rules for the zone yesterday, following a workshop she attended in Wellington last week.

She stressed the city had to do a good job of enforcing them if it wanted to promote its ability to efficiently host events like Rugby World Cup matches in future.

Education and communication was the key, she said, rather than enforcement, and now the council had the information it needed, that would start.

The "clean zone", legislated under the Major Events Management Act 2007, would extend 500m from the stadium's centre, but would not affect other areas, such as training venues.

It would be in place two days before a match, on match day, and the day after match day, and its function was to protect the rights of official sponsors.

The rules restricted street trading and unauthorised advertising in the zone, except for an existing organisation "honestly carrying out its ordinary activities".

Ms Simes said the council, as the local authority that signed the host region agreement, was required to enforce the rules.

The council had been "inundated" by requests for information about the zone.

"We are expected to work with businesses and residents to ensure that, as far as possible, they have an understanding of the requirements of the 500m `clean zone' precinct and the Act."

People needed to be "very careful" they did not align an organisation or event with the Rugby World Cup when it was not so aligned.

A major issue the city would have to deal with was "ambush marketing", where individuals or companies tried to gain "leverage" from the event to promote their product.

"It happens all the time; people will be planning for it."

Large events such as the world cup attracted merchandisers and street traders, and the zone would also allow people to walk to the stadium without being "harangued".

There would be ample provision to buy goods inside and outside the stadium.

Because of the rules, though, the tradition of a sausage sizzle in the zone was also a potential breach, as were raffles or "bucket collections" for any cause.

The zone was set aside for official merchandisers, Ms Simes said.

"We will be providing spaces with a high level of foot traffic where people can do [those activities] legitimately.

"Our aim is to still be able to provide for these events to happen, but outside the `clean zone'."

Council staff would be used to provide enforcement for the zone, and planning for that, and training, would begin soon. Details of how rules would be enforced were yet to be decided.