More cyclists than a year ago: survey 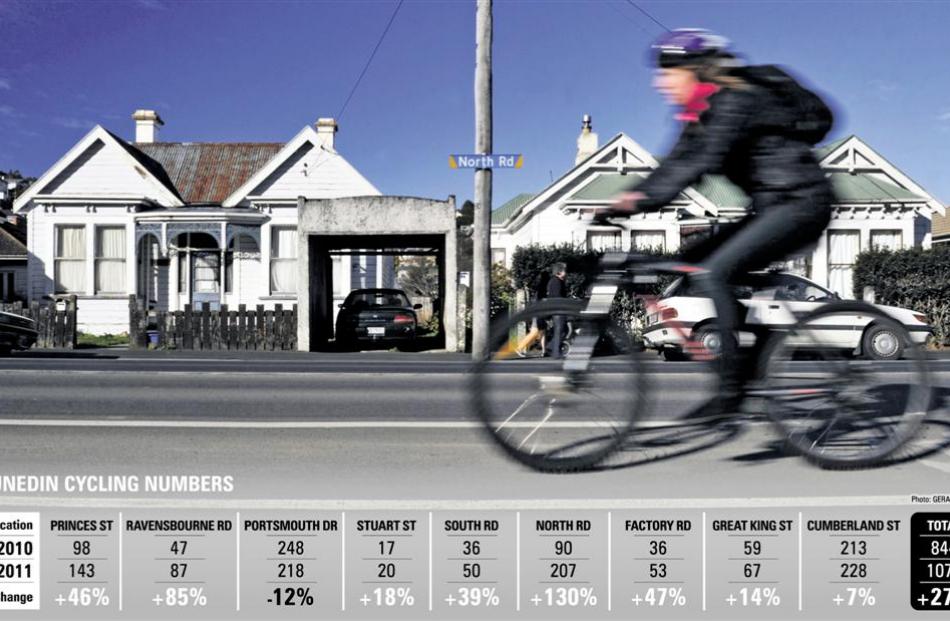 A cyclist rides on North Rd, Northeast Valley, a route which has recorded a 130% increase in cycle numbers in the past year.

A Dunedin survey has found a sharp increase in cycling numbers, as consultation winds up on a proposed multimillion-dollar strategy for cycle routes in the city.

Dunedin will also spend $20,000 on 70 cycle stands for central city sites over the next two years.

The moves have been applauded by cycling advocate Spokes, with spokeswoman Adrienne Mulqueen noting the city could be heading for a "critical point" where the number of cyclists rises rapidly.

Council transportation planning manager Sarah Connolly yesterday said people needed to be wary of reading too much into what was only the second survey of cycle numbers, as it was too soon in the survey process to be certain of trends.

But the numbers, showing a 27% increase overall, were backed up by anecdotal evidence, and appeared to show the city's strategies were headed in the right direction.

Ravensbourne Rd, with an 85% increase, and North Rd, at 130%, were the standout increases.

Last month, the council was presented with, and voted to approve, a report detailing a network of cycle routes in Dunedin connecting key destinations.

Consultation for the proposal ends today.

Ms Connolly said at the time the council was responding to public calls through annual plan submissions for cycle facilities, and trying to deal with cycle safety issues.

The cycling survey, which had been held in March, was released yesterday.

It was the second survey that had been done.

A day of "reasonable" weather was chosen both years, so conditions for cycling were similar.

Cyclists were counted on the same nine routes between 8am and 9am, and those figures were used to estimate an average annual daily number of cyclists using that route.

Asked why she thought numbers were up, Ms Connolly said she could only speculate, but a rise in petrol prices, cycling becoming more of a "normal" activity, and the addition of cycle lanes and other cycle facilities were possible answers.

The outcome for the city, apart from the strategies under way, would be "much more demand" for cycle parking.

The council was about to spend $20,000 from the city development amenity budget on 70 stands, which would be built by Dunedin company Identimark Solutions.

The stands would accommodate 140 cycles, and would be sited in the Octagon, at the Otago Museum, the Steamer Basin Wharf and various other sites which would be decided following consultation with user groups and community boards.

Three sets of the stands were a "stand-out art design" that acted as both a cycling promotion tool and an amenity feature, and spelled out the word "cycle".

The remaining stands were a basic "U" shape design, in keeping with international standards for cycle parking.

People saw others cycling, and along with the infrastructure in place, the sheer number of cyclists lowered any safety concerns. It had been seen overseas that provided a "critical point" where, along with the motivating forces of high petrol prices and health benefits, numbers rose rapidly.

"All these things then accelerate, and it takes off," Ms Mulqueen said.

Apart from new stands, safe lock-ups would be welcomed by cyclists.