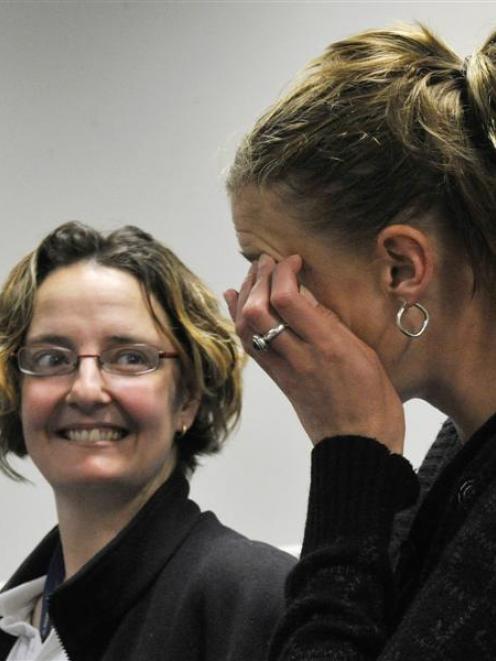 Neurosurgery survivor Nicki Fairbairn (left) supports fellow survivor Casey Coombes as she wipes away tears of relief after the decision. Photo by Gerard O'Brien.
Anxious neurosurgery campaign supporters had to overcome a technical glitch yesterday when the audio link between Dunedin and Wellington crashed before the good news about neurosurgery could be relayed.

About 30 people, including neurosurgery survivors, union members and health workers, gathered at Otago Museum's Hutton Theatre for a live stream of the announcement from Wellington.

Seconds into the specially convened press conference, the link crashed, leaving supporters in the dark about the fate of neurosurgery in the South.

To cheers, claps and visible relief, he announced Dunedin Hospital would be home to a minimum of three neurosurgeons.

Facebook page co-founder and Southern District Health Board member Richard Thomson told the happy crowd he "always believed" that when the expert panel considered the matter and heard the arguments, the decision could only go one way.

Speaking to the Otago Daily Times as the crowd dispersed, Mr Thomson congratulated Health Minister Tony Ryall, the Ministry of Health and the expert panel.

The decision represented a new direction in health planning in New Zealand, an approach that was cemented last month with an amendment to health legislation, he said.

The final decision was stronger and more advantageous to Dunedin than what the Southern health board could have achieved had it kept "battling" at the regional DHB level.

"Fence mending" was needed to repair damaged relationships with Canterbury, and he was confident that could be done.

Neurosurgery survivors Nicki Fairbairn and Casey Coombes were both delighted with the outcome.

Ms Coombes (29), who was in a serious car crash in Dunedin in 2002, said she had advocated for a minimum of three neurosurgeons throughout the campaign.

Losing neurosurgery would "kill" a service that saved her life at Dunedin Hospital.

Ms Fairbairn said the "awesome" outcome was also a boost for the "oldest, best" university in New Zealand, Otago.

The public campaign had been excellent and made people feel they could influence the Government, instead of feeling powerless, she said.

Prof Mann, who organised yesterday's gathering, said the outcome set a precedent for the way similar decisions would be made.

The public's input had been crucial and it became clear in the campaign that people understood the issues involved, rather than insisting Dunedin keep neurosurgery out of parochialism.