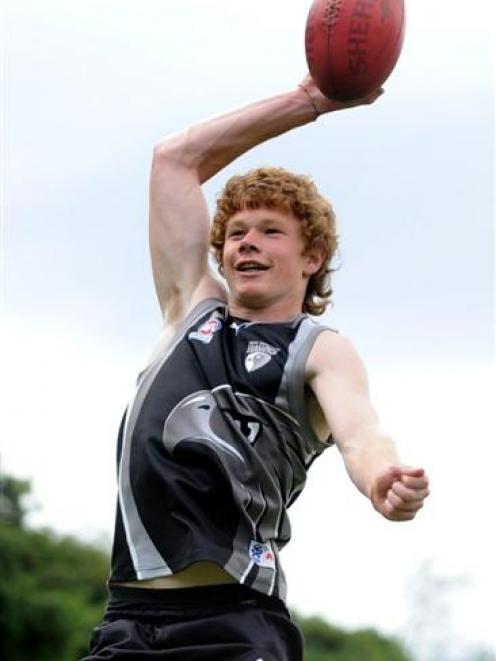 Ben Miller handles an Australian Rules ball at Littlebourne. Photo by Peter McIntosh.
Ben Miller has signed up to be a Hawk, and he is already flying high.

Ben, a year 13 pupil at Otago Boys' High School, has been awarded a scholarship by Australian rules football side Hawthorn, known as the Hawks, and will journey across the Tasman to learn the ins and outs of a game which still puzzles many New Zealanders.

Ben (17) was part of a successful national age-group side which won the Oceania Australian football tournament in Fiji late last year.

Hawks scouts were impressed with Ben's work around the field, his kicking ability and skills in the air, and have given him some money, as well as funding three trips across the Tasman this year to work on his game.

Three players from Auckland have also been awarded scholarships.

Ben said he did not know a lot about the contract but as a game Australian football - colloquially known as Aussie rules - had plenty of attractions.

"There is a lot more running around and you can be going in all directions. You're not going forward all the time and you can kick the ball in all different directions," he said.

An outside back in rugby, he said his body did not take as much of a battering in Australian football as in the 15-man code.

"There is way more freedom to move around and lots less contact. But then you've got to be very much fitter. It is a huge field."

Australian football was introduced to the school a couple of years ago by physical education teacher Warwick Kain, an Australian, who played the game in his youth.

He hoped to field a school side in a national under-20 tournament in Christchurch next month.