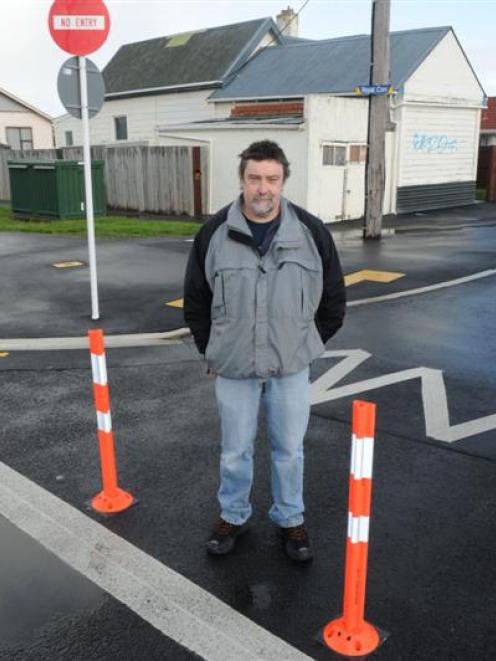 Trevor McStay with new bollards installed on the street. Photo by Craig Baxter.
A South Dunedin resident upset at cycleway initiatives has presented a 600-strong petition to the Dunedin City Council calling for the changes to be reversed.

Trevor McStay presented the petition, signed by 657 residents, to councillors at a public forum at the start of Thursday's infrastructure services committee meeting.

Mr McStay, who lives in Marlow St, was upset a two-way intersection at Marlow St and Royal Cres became a one-way exit-only from Marlow St.

The change created a ''quiet street'' and forced people who had used it as a through route to find new ways to schools and work.

Mr McStay said he wanted the change, and others in the area, reversed, and the council had been ''underhanded'' in not keeping residents adequately informed.

Of the 657 people who signed the petition, only ''about 12'' had heard about the changes before they were introduced, he said.

Mr McStay said he would have opposed the changes had he known, but had since been told by council staff the new arrangements ''were here to stay, no matter what you do''.

He was not against cycleways; ''it's just the way they have blocked off the streets''.

''I think cyclists and motorists can share the roads.

''Could you please listen and make the changes back to our roads,'' he urged councillors.

The change was consulted on as part of both the Royal Cres and Marlow St cycle routes, she said.

Staff had also offered to visit to explain why the change was made - mainly to improve the safety of cyclists - but that offer had been declined.