Practising what she preaches – for a good cause 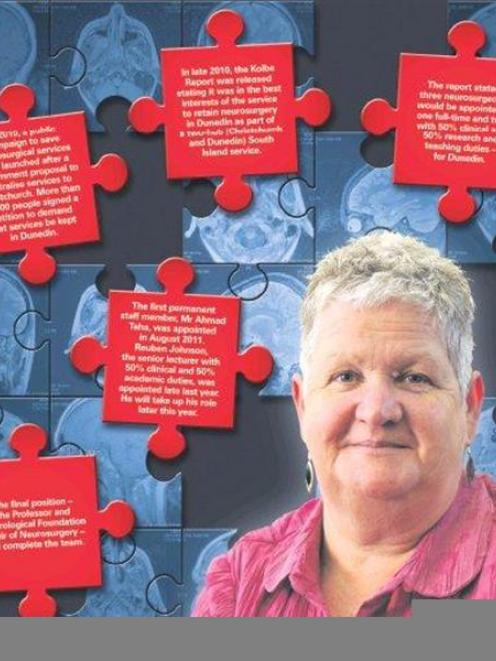 Cathy Matthews had surgery to remove a brain tumour in June, 2011. Photo by Gerard O'Brien, Graphic by ODT artist.
Cathy Matthews' life was saved by the service she championed but did not think she would need.

During the campaign, Mrs Matthews arranged media interviews with the brain injured, and helped her members participate in the public march, public meetings and petition.

The 53-year-old was delighted in November 2010 when the neurosurgery panel recommended Dunedin retain the service, with the University of Otago becoming an academic centre of excellence in neurosurgery.

Several months later, Mrs Matthews had urgent surgery to remove a brain tumour, which was revealed in a scan a week previously.

While it was benign, the tumour had thrown Mrs Matthews' health into disarray.

"I was crook as. I was on all fours, vomiting constantly, unable to work. I kept getting numbers mixed up, and saying things that made no sense at all." She could not walk properly, slept most of the day, and frequently vomited.

The illness struck a few weeks before she was to have departed for a lengthy overseas trip.

Now back at work on reduced hours, Mrs Matthews said that since her surgery in June, she better understood what her clients faced.

And the experience made her even more aware of how vital the service was to Dunedin.

"I had some understanding before [the illness] but it was still scary." "For people thrown into the system with no experience at all it must be extremely hard." Follow-up care in Dunedin was excellent, which helped recovery and rehabilitation.

While not keen on the publicity of a newspaper story, she was doing her bit to highlight the importance of the fundraising.

"I now have to do what I've been preaching [to clients] for the last five years." Mrs Matthews has been liaison officer for the association since its inception in 2006.

However, her ties with brain injury go back much further, to the former Otago Head Injury Society, for which she was a volunteer.

Her involvement with brain injury issues started 25 years ago, when her then 5-year-old child was hit by a car.

The severely injured child was in intensive care for 10 days, a coma for three weeks.

"My child had to learn everything again as from birth - they had to learn how to hold their head up, how to roll over - it was just like watching a baby develop, though at a much faster rate."

Her child made a good physical recovery, but carried a legacy of brain injury for which there was little support.

"We had no understanding of cognitive deficits, or how the brain had been affected ...

What we did know was our child had trouble coping, which often showed itself in behaviour, making their interactions with others problematic for everyone."

The experience with her child made her realise that brain injuries were permanent.

Dunedin's tertiary institutions meant the city was in an excellent position to be an academic neurosurgery centre.

Each September, 24 brain injured people from the association spoke to medical students at the Dunedin School of Medicine. Links between support groups and tertiary institutions helped strengthen training and services in Dunedin, Mrs Matthews said.