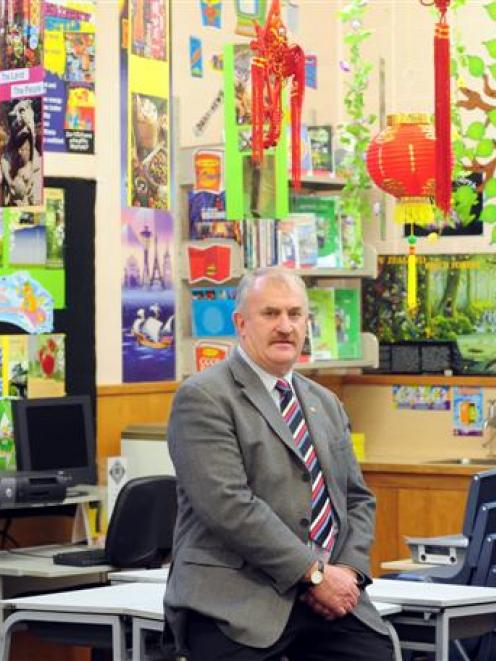 Arthur Street School principal Bruce Robertson will retire in September. Photo by Craig Baxter.
"It never ceases to amaze me, the way children can grasp concepts and develop emotionally, physically and academically as they go through the school."

It will be one of many things Arthur Street School principal Bruce Robertson (60) will miss most about his job when he retires later this year.

It was also one of the things that inspired him to train as a teacher, he said.

"I enjoy working with them and helping to shape their young minds."

It was one of his most memorable schools, not only because it was his first, but also because that was where he met his wife, Diana.

Since then, he has taught at six other New Zealand schools - including Oturehua School and Duntroon School - and one in Australia before taking up work at the University of Otago College of Education as an adviser to rural schools.

However, the call of frontline teaching was too great, and he eventually returned to the chalk board at Arthur Street School, where he has been principal for the past 17 years.

While he would miss the daily interaction with children, Mr Robertson said he would not miss the "ever-increasing demands" being made of teachers which had come about with the introduction of national standards and the new curriculum.

"It's becoming a very frustrating situation which doesn't necessarily have to be that way.

"I agree with national standards, but not the speed with which they have been introduced.

"Had I been 10 years younger, I would have coped with them better."

Despite the growing challenges associated with education, Mr Robertson said they had not been a factor in his decision to retire.

"It's simply the case that my time has come."

Mr Robertson will retire at the end of term 3 this year and although he has no plans for the luxury of spare time, he hopes to knock off a few things from his "bucket list", including going to the Melbourne Cup.

A replacement principal has not yet been appointed.

Mr Robertson said it was an emotional time, but he hoped his presence at Arthur Street School had left a legacy of a caring culture among its staff and pupils.

"A culture of mutual respect and dependability - that's what I would like to think I have left."