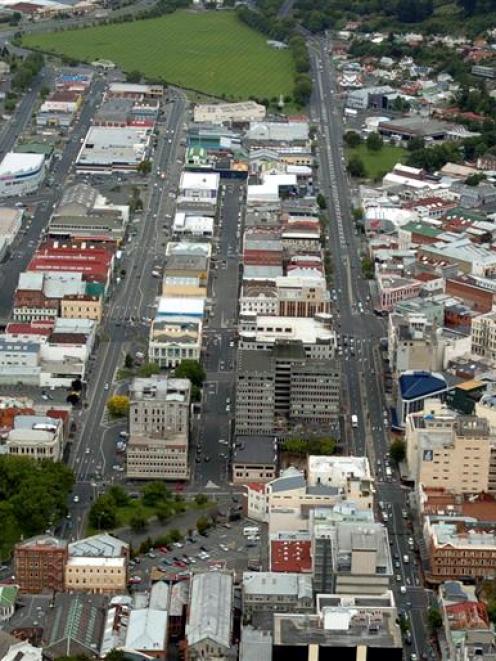 Central Dunedin, looking south. Dunedin Mayor Dave Cull envisages the area between Cumberland and Crawford Sts, left of centre, becoming a retirement hub. Photo by Stephen Jaquiery.
For Dunedin Mayor Dave Cull, the stunning but underused heritage buildings between Cumberland and Crawford Sts do not have to be used as commercial buildings, or apartments.

His idea is, in 10, 20 or even 30 years, a retirement complex of the sort now dotted around Mosgiel, but in a location and in buildings perhaps more conducive to the baby boomers who will soon be shuffling towards their twilight years.

That idea, though, would require some serious changes to planning rules for the city, rules that have attracted some criticism.

To the council's credit, those concerns are not new to elected members or staff, mainly because of the work of the heritage buildings economic reuse steering committee.

The committee was voted into existence in January last year, its purpose to find what barriers stood in the way of the city's heritage buildings being saved and reused.

The brainchild of the last council, it grew from a heritage strategy developed in 2007, the appointment of a heritage policy planner in 2009, and was one of the first committees chaired by then councillor Dave Cull, now Dunedin's mayor.

With Mr Cull's duties now expanded because of his mayoral role, the chairmanship of the committee has been taken over by Cr Lee Vandervis, while the staff member doing much of the work is heritage policy planner Glen Hazelton.

Mr Hazelton said after a year, the committee had completed the information-gathering phase and identified the problems, and it was now in the "opportunity phase".

When discussing some of the challenges the city faced in saving its heritage, Mr Hazelton pointed to an underlying issue mentioned by many of those spoken to.

"We simply have more buildings than there is demand for the space.

"That is one of the primary challenges. There was a boom in the gold-rush days, and those buildings are still standing.

"Because of low economic growth, they are still there.

"That is also what threatens them today."

Mr Cull said the steering committee was set up for two purposes, the first to identify any impediments to reuse of buildings, the second to find ways to overcome those impediments.

To identify them, it had met with a variety of groups, including engineers, real-estate agents, property managers, valuers, tenants, owners and insurance brokers, and had visited a variety of sites to see what their issues were.

It was now at the stage of trying to formulate some solutions, at least in areas over which the council had some control.

Mr Hazelton listed the main challenges that had been identified.

He said heritage buildings had inherent issues: they were built a certain way, which often did not meet the purpose people had for them today.

If they were not maintained, there was a cost to reusing them; there were more buildings than there was demand for them; and not everyone who owned buildings had a passion for heritage.

"Overseas, people pay a premium to be in a heritage buildings. Here, people don't value it so much, there are so many. You get that scarcity value in Auckland and Wellington ..."

There were also leadership issues concerning how the council and others involved in heritage dealt with the issues, and, finally, there were regulatory challenges; Building Act, resource consent, district plan, and earthquake-prone policies.

"Sometimes there are barriers there. We're looking at ways we can co-ordinate things better so there's a consistent message," Mr Hazelton said.

"We have the raw resources, many of the best experts in the country in things like earthquake strengthening; how do we capitalise on that so we have courses at the university, pilot schemes that match all those things up?

"There are opportunities for the Otago Polytechnic, the University of Otago: social services agencies would in some cases fall over themselves to be involved in something like that."

In addition to those problems, Mr Cull noted the perception of the expense of earthquake-proofing buildings, and dealing with fire prevention.

"That's one thing we've identified as a major impediment on somebody spending a great amount of money, when they're not going to get much from the tenants."

Another major problem was that a good deal of Dunedin's heritage building was on leasehold land.

"For a variety of reasons, there is no incentive for someone who owns the building, but does not own the land, to put money into the building.

"That [invetsment] can increase the value of the property, the land rent goes up at the next review and they're back where they started. I will go so far as to say the large amount of leasehold land in the city is holding the city back."

Asked when the committee would start looking at solutions, Mr Cull said it already had.

The Canterbury earthquake in September had "really brought the dangers home to us", and the committee was looking at producing a checklist on how to look after the most vulnerable parts of old buildings: the chimneys and the parapets.

Cr Vandervis said while the council may only ever be in a "seed funding" role, it would be possible to use heritage funding to hire engineers to devise generic solutions to reinforce chimneys, or perhaps tie back a facade.

"The surprising thing to me was in the case of a chimney all you need to do is put a stainless-steel pipe down it, and although it may not save the chimney in the case of an earthquake, it may at least keep it up there, stop it coming through the slate roof, the next floor and so on.

"Stainless flues for wood burners saved a lot of chimneys in Christchurch. There are quite simple solutions to these issues. We can distribute those to building owners."

Mr Hazelton had also developed a "team approach" at the council, where staff from different departments guided a person through the process.

"There is the possibility to line them up with incentives, the heritage fund, or if it's a big project it might qualify for rates relief," he said.

"Last year, we had the `getting started' workshop for building owners. We want to make that an annual event.

"It's connecting people with the right information. There's lots of people that want to do the right thing; they just don't know how to do it."

For what he described as the opportunity phase, the committee would begin "brainstorming solutions", working out ideas that could be implemented without a change of policy or a "massive" amount of funding.

"We can start implementing those things like checklists or the workshops."

Reviews of the district plan and the dangerous, insanitary and earthquake-prone buildings policy were also under way.

"If they are bigger things, we can report back to council and make some decisions on those."

Rates relief for reuse of heritage buildings (contestable fund; up to 50% off general rate for approved projects).

- The heritage strategy was adopted by the Dunedin City Council in August 2007.

It is a non-statutory document that formally recognises the importance of heritage to Dunedin, its residents and visitors.

The strategy sets out the vision and goals for the sustainable management of Dunedin's heritage.

It also provides the framework to guide the council's future work programmes and initiatives for heritage across the entire district, which will involve working with property owners and other organisations concerned with heritage management.