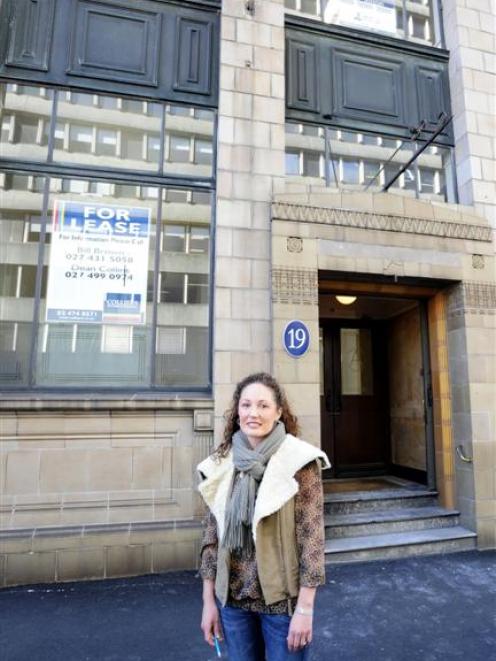 The owner of the Woods Adams building in Bond St, Michelle Kennard, said the structure had been transformed from a home for pigeons and a canvas for graffiti with help from the Dunedin City Council in the form of rates relief and money from the city's heritage fund.

The building was the first to go through the council's joint consent working group, an initiative that came from the heritage buildings economic reuse steering committee, set up to deal with the deterioration of the city's heritage stock.

The steering committee was voted into existence in January last year, to find what barriers stood in the way of the heritage buildings being saved and reused.

The working group uses a team approach to guide people through the consent process, and line them up with possible heritage fund money and rates relief.

The council hopes the work done to the building will add to the momentum provided in the historic area by restored buildings such as Lawrie Forbes' Rogan McIndoe Print building, and Stephen Macknight's Clarion Building.

Dunedin has been lucky to have saved many of its gold-rush era buildings, which have survived in part because low economic growth has meant they have not been demolished to make way for development.

But that lack of growth has been identified as a threat to the buildings now, as there is not enough demand to make their refurbishment and reuse economic.

After a tour of the Woods Adams building last week, council heritage policy planner Glen Hazelton said people were working hard to turn the situation around, and there was some "inspiring" work occurring.

Ms Kennard said is from Auckland, but her husband Graeme is from Oamaru, and the "pull of the South" resulted in the pair buying the building in 2005 as a potential investment.

Initial plans to remodel the building did not go ahead, and the couple decided to sell but were caught out by the recession, with a planned sale not going through.

Turning the building into apartments did not add up financially, and it was decided to develop it as commercial space, keeping as much of the heritage character as possible.

Ms Kennard said working with the council had been "excellent", with Mr Hazelton helping her negotiate her way through dealings with different departments.

The project received rates relief for three years, and $28,520 for investigations into the repair of the tiled facade and the repairs themselves.

Mr Hazelton said the NZHPT category 2 historic building was important because it was part of a "cohesive block" in the heritage area, and had a unique style for Dunedin as a transitional design between Edwardian and Art Deco architecture.

"It is quite an unusual style," Mr Hazelton.

The NZHPT had provided help with technical aspects of the work.

Ms Kennard said friends had warned her not to get involved with the trust, but the experience had been "really, really positive".

Mr Hazelton also pointed to the development of the council's central city plan, which will include a regeneration plan for the "warehouse district", of Vogel, Crawford and Bond Sts, and further help for the former centre of Dunedin commerce.