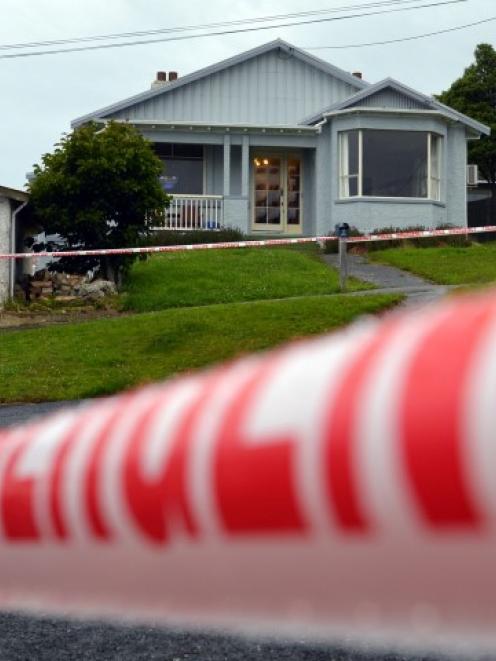 Those who knew Edward Livingstone said his behaviour set off so many alarm bells it was a wonder no one saw the fatal confrontation coming. Photo Stephen Jaquiery
Authorities missed many red flags before Bradley and Ellen Livingstone were killed by their father in their Dunedin home.

The missed chances to stop Edward Livingstone, 51, from harassing and threatening his family meant a protection order against him was fatally compromised.

Livingstone shot and killed his children and then himself on Wednesday night, eight months after he and their mother, Katharine Webb, split. She had a court order to keep him away from her and the children.

Despite that order, he called and emailed her. He wrote "your beautiful (sic)" on her Facebook page. He followed her in his car.

The order did not restrain him, resulting in two court appearances facing charges of breaching a protection order.

The court heard Livingstone was having a "traumatic" time after the break up of his marriage, was having counselling and was on medication.

The judge who sentenced him after the second breach was told Ms Webb felt harassed and feared for the safety of her children. She installed a panic button beside her bed because she was terrified of Livingstone.

Friends say they contacted police to raise concerns over threats he had made about killing his family. And Livingstone's employer said it was obvious he was having a hard time in his personal life.

Those who knew the family and that Livingstone's behaviour was setting off so many warning bells have been left wondering why no one saw that he was capable of the fatal confrontation at his former home.

The protection order was issued on May 5. In August, Livingstone breached it by contacting Ms Webb. It is understood he emailed and phoned her.

He admitted the charge and as it was his first offence he was granted police diversion.

On September 14, he rang Ms Webb's cellphone several times, then rang her landline and left a message. He was charged a second time with breaching the protection order and again admitted the charge.

"That you phoned her and left a message is in direct contravention of the terms of the protection order," Judge Stephen Coyle told Livingstone at the sentencing hearing.

It was accepted that the content of the message was not threatening - Livingstone had left a message apologising for his previous behaviour.

But the contact had been frightening for Ms Webb.

"The victim impact statement indicates that she realised the calls were from you and because of the frequency of the calls on the cellphone, she became very anxious and fearful, and she felt alone and unprotected," the judge said.

"She remains fearful that you will breach the protection order and describes feeling constantly harassed and fearful for her safety and that of the children.

"She states candidly that she cannot take much more of the contact from you and the breaches of the protection order."

But Livingstone was granted a discharge without conviction.

"The effect of the separation on you has been traumatic and has led to you having some issues which have required medication," he said.

"Following this second incident, you have again approached (your doctor) and the letter from him indicates that he has changed the medication you are receiving and that you are now more stable.

"It is clear, therefore, that at the time of the circumstances leading to this offending, while you were receiving treatment for your mental health issues, the medication you were receiving was not quite levelling you out to the point where you were able to totally control and manage your behaviour, and things again got on top of you and you reacted spontaneously and in contravention of the order."

Police opposed the discharge, but Judge Coyle said a conviction could cost Livingstone his job which would outweigh the gravity of the offending.

It now emerges that Livingstone, while apparently contrite and remorseful in court, had sinister and violent plans for his ex-wife.

He told friends in August, three months after the protection order was granted, of his plan to murder his children and then take his own life.

"He told me in August what he wanted to do," a source said.

"He made his mind up months ago. He told us what he wanted to do was that he wanted to kill his family, leave them in their bed, take an overdose of sleeping tablets, pour petrol around the beds, and light it.

"He was consumed with revenge. The kids were Katharine's life - they were the centre of her universe - and he knew killing them was the worst thing he could do to her, and that's why he did it."

Ms Webb had told neighbours that if they heard the panic alarm sounding they should phone police immediately, "because it was him doing something".

The source said that one night, Livingstone chased Ms Webb in his car.

"She came off the St Leonards main road, saw his car parked on the street, and as he saw her, he chased her all round St Leonards in her car. She had the kids with her. She was terrified.

"She ended up turning her lights off - because it was dark - and going up someone's driveway."

The friends told the Weekend Herald that officers did not follow up or interview them after the incident.

Since the murder-suicide, police have repeatedly refused to answer questions about their involvement with the family.

They will not say how many times Ms Webb or others contacted them with concerns or complaints about Livingstone, nor will they say how they responded.

They have also refused to address the claim that they did not follow up threats made by Livingstone.

"The circumstances leading up to the tragic events of yesterday are subject to investigation on behalf of the coroner," Inspector Greg Sparrow said in an emailed statement.

"Based on the information available to us at this time police [are] satisfied that all reports made to police regarding this family were responded to appropriately. Police will not be responding to unsubstantiated claims through the media. Out of respect to the family at this tragic time we will not be discussing specific details through the media."

The source said that on Wednesday night, Livingstone went to the Kiwi St house he once shared with Ms Webb and the children.

He used a "secret key" that Ms Webb did not know about to let himself into the house through a side door. He was carrying a petrol can and a shotgun.

Ms Webb ran for help, screaming "he's got a gun" as she fled to her neighbour and close friend Chris Foot's home.

"He had a gun and she was petrified. The kids were asleep and there was no way she could've got them out alone. He would've shot them there and then."

As she ran she heard the gunshots that killed her children as they slept.

"Protection orders are supposed to protect," said the source. "And in this case, it didn't. That family has been so let down by police and the system."