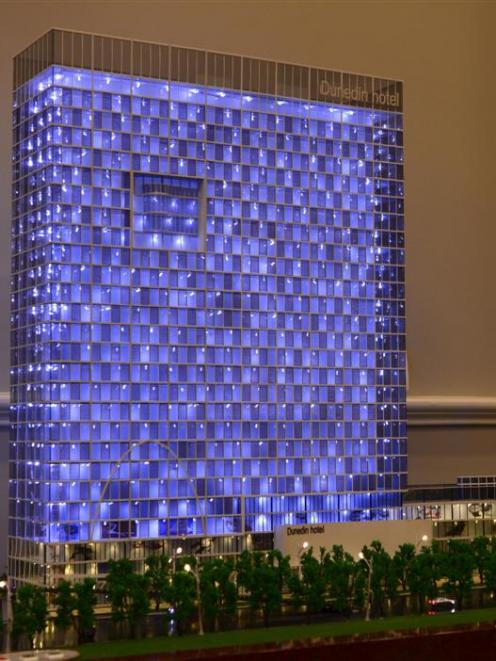 The proposed hotel.
The Otago Regional Council has launched a fresh attack on the $100 million waterfront hotel proposed for Dunedin, saying a lack of information on the proposal means resource consent for the project should be rejected.

The argument from ORC counsel Alistair Logan came as the consent hearing for the controversial hotel reconvened yesterday in Dunedin.

Mr Logan told the Dunedin City Council's hearings committee the company behind the hotel plan - Betterways Advisory Ltd - had chosen not to supply some information that had been requested by the committee.

That was their prerogative, but they now had to ''live with the consequences'', he said.

The committee had adjourned the hearing in December and later wrote to Betterways seeking five pieces of further information to aid its deliberations.

Betterways provided three of them, but declined to demonstrate the hotel's height at the site - by using a hovering helicopter, tethered balloon or some other means - or provide a report by a recognised landscape architect.

Mr Logan yesterday said Betterways had failed to fully identify and adequately assess the hotel's impact on its surroundings, and further information provided also highlighted ''the deficiencies with the application''.

That included new images purporting to show the hotel from locations around the city, which were ''inadequate and uninformative'', he said.

Questions also remained over the hotel's final design and its full effects, including the visual impact on the surrounding landscape, as well as wind and construction issues, he said.

''In these circumstances, there is no option but to refuse consent,'' he said.

Speaking earlier, Betterways solicitor Phil Page said the company had decided against incurring the cost of a balloon, helicopter or crane to show the hotel's height, because none of those options would adequately demonstrate the hotel's bulk.

''We did not think that the means which were available were going to serve the purpose,'' he said.

A landscape architect's report was also not provided because the company felt enough evidence about the hotel's suitability for the industrial site was already before the committee, he said.

Wider evidence about its impact on the harbour setting was not relevant, he believed.

''We wish to not lose sight of what is on the table for you to decide.''

Yesterday's session was also a chance for submitters to respond to the extra information in person, although only a handful chose to do so.

Islay Little said the lack of information meant the committee was being asked to make ''a leap of faith'', and worried about the impact of ''such an edifice'' on its surroundings and the potential for the council to incur extra costs.

Liz Angelo-Roxborough also criticised the lack of information, including a height demonstration, saying a tethered balloon would have caused concern ''now rather than later''.

The additional images instead played down the hotel's size, colour and shape, she said.

Mr Anderson conceded some people would still not be happy with the new images of the hotel's appearance, but said criticism suggesting they were not a true representation were ''absolute rubbish''.

He was also confident wind effects from the hotel could be addressed during detailed design work, citing information from Neil Jamieson, the research leader of aerodynamics at Opus International Consultants.

Any unexpected wind problems could be addressed after the hotel was complete by adding glass wind shields to protect outdoor areas, he said.

However, commissioner John Lumsden said wind ''has to go somewhere'', and a lack of information about wind issues meant ''uncertainties'' remained.

Mr Holmes gave a breakdown of construction stages during the hotel's build, which could take up to three years and three months, but was confident challenges with foundations, access, noise and other issues could be overcome.

Council consultant transportation planner Ian Clark said some transportation issues had been addressed, including a shortage of on-site parking and the operation of the hotel's exit on to Wharf St for cars and coaches.

However, he remained concerned about safety issues arising from vehicles performing ''unexpected U-turns'' near the site, pedestrian access from the hotel to both the Octagon and harbourside, and the hotel's ''cramped'' on-site layout.