Reserves set to go ahead 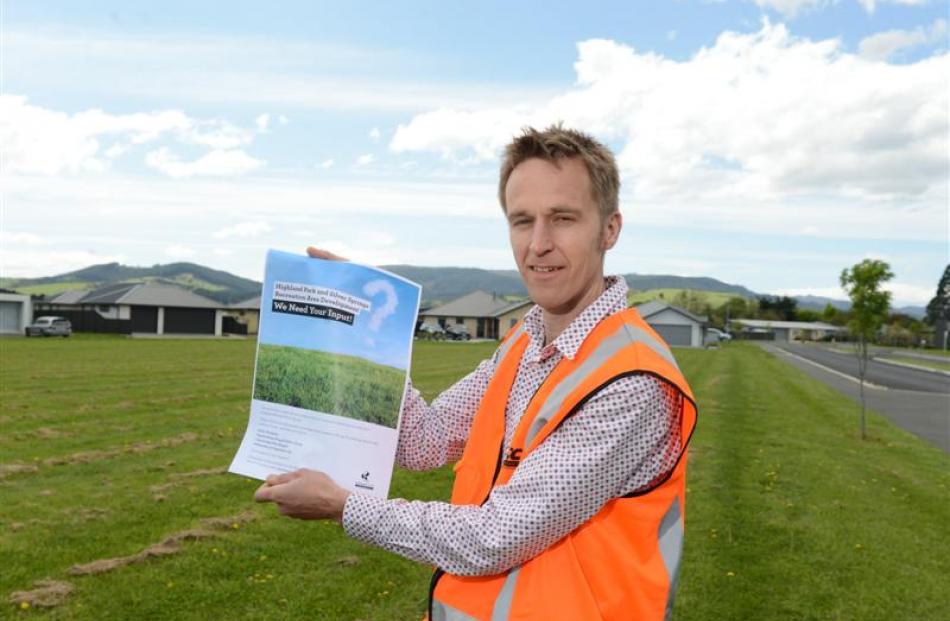 Dunedin City Council recreation planning officer Andrew Lonie at a reserve in Silver Springs subdivision in Mosgiel set to be developed as a public recreation area. Photo by Linda Robertson.

Nearly $250,000 is set to be spent developing public reserves in Mosgiel subdivisions and the community has expressed its wishes for the space.

The reserves would be developed for public recreation.

The funding was from subdivision developers.

The first round of community consultation closed on October 9 and included a workshop at the Mosgiel Public Library, which 40 people attended.

Most of the people making submissions were residents in the subdivisions, Mr Lonie said.

The consultation collected ''broad'' ideas on the types of recreation people wanted.

''Whether it's a playground-type experience or a native planting - a natural feel - or if they want to see an area for sports games, or adult fitness, or dog walking.''

Various ideas were suggested and common themes could be seen, Mr Lonie said.

However, he declined to say what they were because ''I don't want to want to predetermine the analysis of the consultation''.

The public had given different ideas for both reserves and he doubted the reserves would be developed in a similar way.

The submissions would be used by council staff to create a brief to give to designers to create concept plans for both subdivisions.

The plans would go out to the community for the second and final round of consultation early next year.