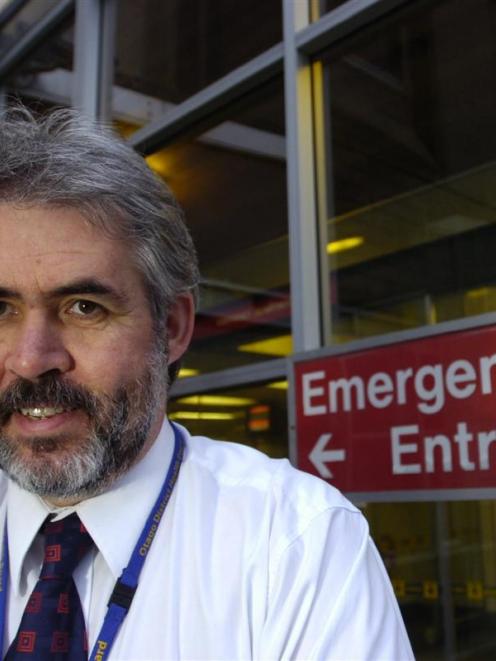 Dr John Chambers has opened the door for Dr Tim Kerruish to take over as clinical leader of Dunedin Hospital's emergency department. Photo by Peter McIntosh.
Outspoken Dr John Chambers has stood down after 17 years as Dunedin Hospital emergency department clinical leader, but he has not finished yet. He is looking forward to being a full-time specialist without the leadership role. Dr Chambers reflects on his time in charge of emergency medicine with ODT health reporter Elspeth McLean.

Straight-talking Scot Dr John Chambers (55) has often hit the headlines during his 17 years as Dunedin Hospital emergency department clinical leader, but he says that is "almost in the job description".

He readily admits he is no shrinking violet, saying emergency department leaders are there to advocate for their patients along with their departments.

"I think you will find every doctor in charge of an emergency department is prominent.

"We are often asked our opinions."

Sometimes the emergency department was "where things are happening in society" and flagged trends about such things as drug use and types of accidents.

Since he came to Dunedin in 1993, Dr Chambers has frequently spoken out about the state of the department, countered frequent claims too many people were turning up for minor ailments, and has had to front up in situations when the department has come under criticism.

In recent times, he even controversially turned to verse, published on the Association for Salaried Medical Specialists' website, to vent his frustration with what he saw as a lack of progress towards improvements in his department.

Dr Chambers trained in Scotland, worked in England and was in Adelaide - where he had just finished his training as a specialist - when he saw the senior ED doctor's job advertised at Dunedin Hospital.

At that time, the department was led by GP Dr Peter Bamford, and when Dr Chambers took over, he was the first trained specialist to take on the role.

At that time, emergency medicine in New Zealand was very much in its infancy, he said.

During his time in the department, he has seen the number of doctors - including both senior and junior clinicians - increase from 7 to 24.

It had also been very gratifying to see the development of emergency nursing in that time.

Dunedin had an excellent team of dedicated nurses without whom doctors could not do their job, he said.

Senior doctors at Dunedin Hospital had benefited greatly from his support and input over the years.

Dr Chambers said during his 17 years, the role of the department had changed considerably.

Today, there was a lot of observational medicine, with patients in the care of the department for the whole of their stay, whereas in the past, patients would receive an assessment in the department then move quickly to a ward.

He had not been in Dunedin long before he was agitating for improved facilities and was pleased when the department got a $2 million upgrade in 1998 which was "a great improvement on what we had before".

Dr Chambers said he was proud of the performance of the department around the turn of the century compared with other hospitals.

However, he had always expected that the 1998 upgrade would only last about 10 years and that had proved to be the case.

Now, the department was not adequate to offer the sort of observational medicine being practised in emergency medicine.

Patients who would not be admitted to a ward but who needed a period of observation needed to be in a proper acute ward, not spending many hours in a corridor.

One of the "big positive things" about the past 17 years had been the increase in the number of specialists and the number who had done much of their training in Dunedin.

The department had nine specialists and five of them had Dunedin training.

Registrars in training had a 100% pass rate, which was as good as any other Australasian centre, he said.

He estimates there are about 25 specialists working all over Australasia who were largely trained in Dunedin during his time.

One of the main reasons Dr Chambers was attracted to the Dunedin job was that the city offered a teaching hospital with both neurosurgery and cardiac surgery.

That was rather unusual, even for larger centres such as Auckland, he says.

"One of the frustrations training in the UK was having to spend hours and hours in ambulances transporting people between hospitals."

He estimated there were only about four or five hospitals in the United Kingdom which were teaching hospitals with a range of specialties.

In the recent debate over the siting of neurosurgery in the South, he considered that aspect of Dunedin's facilities had been well emphasised and the expert panel reviewing the service could "see exactly what Dunedin had and that it shouldn't be eroded".

Dr Chambers said one of the aspects of emergency department work which was changing was the increasing number of elderly people with complex needs who were turning up.

When he reviewed some figures recently, he was surprised at the number of patients aged 80 and more.

Dunedin needed to keep up with how other leading hospitals were dealing with this trend.

The number of patients presenting purely with intoxication was quite stable, but there were many patients who had other conditions which had some link with alcohol consumption.

He was reluctant to draw too many conclusions about this, as someone who trained in Glasgow where it seemed everybody who turned up was drunk.

"It is fair to say a fair proportion of ED attendances have always been intoxicated."

Even after all this time, Dr Chambers concedes there are nights when he loses sleep worrying about a patient's diagnosis.

"It's not always easy and you do worry, did you get it right?"A mentor once told him that with many decisions to make each day "if you get 99% of them right, then you are a good doctor.

"You have to recognise you won't always get it right."

With the increasing number of diagnostic tests available to doctors now, "quite honestly, we don't miss much".

Twenty years ago, it was a different story and people who hankered for the "good old days of hospitals" tended to overlook that.

"People used to die of all sorts of things 20 years younger than they do now."

Dr Chambers said he was looking forward to being a full-time specialist without a leadership role.

He would also be working in an advisory capacity with St John.

He estimated he had another "good 10 years" of work in him.

His wish for the department is not likely to change, however.

He wants investment in the department similar to that which is occurring in other places in the country so patients can get out of the corridors and receive a "good quality of care".

This would involve ongoing commitment to make sure patients did not "creep" back into the corridors again in future years.