Seats to fill for those wanting to give it a whirl 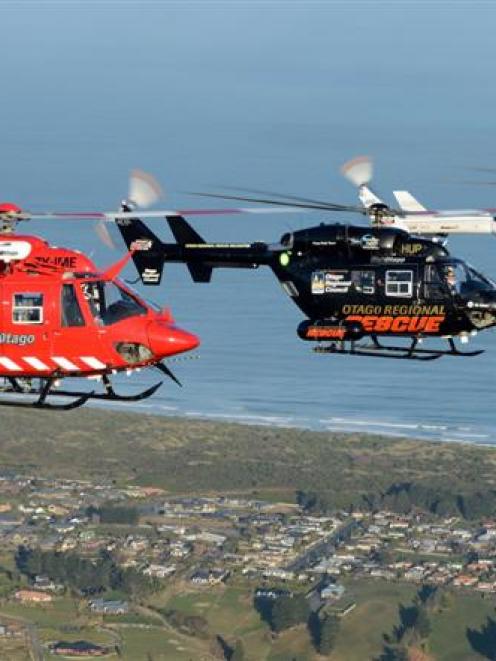 Those willing to dig into their pockets are being offered a rare flying experience in a twin-engined Kawasaki BK117, similar to the rescue helicopter.

On Saturday, Helicopters Otago will fly passengers over Dunedin in one of its BK117s and donate the full $100 a seat to the Chair of Neurosurgery Campaign.

The Helicopters Otago-owned rescue helicopter will also be on display at the Kitchener St helipad with paramedics and crew, and will be used in a rescue display over Otago Harbour about 1pm, unless otherwise dispatched.

Flights over the city will begin from Kitchener St about 11am and continue through the afternoon.

Up to seven passengers will be carried on each of the short aerial tours.

Helicopters Otago owners Graeme and Rosslyn Gale wanted to do their bit for the neurosurgery campaign, and would cover the cost of operating the scenic flights.

"It's our way of trying to put something back into the community, and it is an opportunity for people to give directly to the neurosurgery campaign and get something out of it as well," Mr Gale said.

As a rescue pilot, he was constantly reminded of the need for local neurosurgery services.

"We carry a significant number of people that require neurosurgery and see first hand the demand for the service.

"It would be an absolute tragedy for us to have to cart people further afield than Dunedin," he said.

It was the first time scenic flights in BK117 helicopters, which had a top speed of about 270kmh, had been offered in Dunedin, Mr Gale said.

"The machines are so expensive to run, they would never usually be used for joy rides," he said.

To date, just over $2.3 million has been raised for the neurosurgery appeal, which has a target of $3 million.