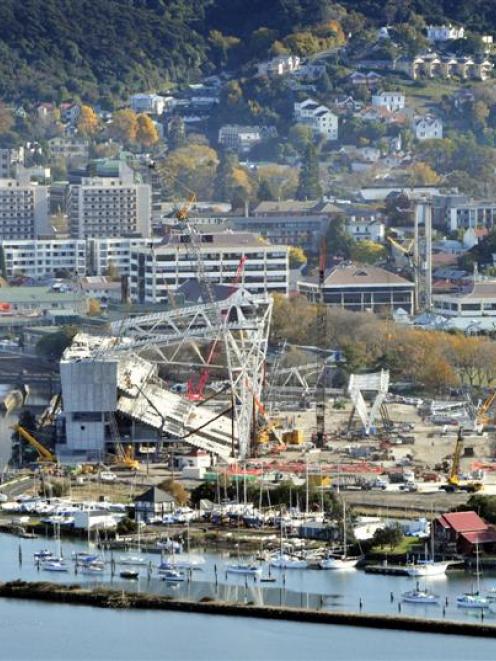 Two 100-tonne roof trusses at the Forsyth Barr Stadium bridge the gap from the south stand to two 85-tonne steel support columns erected earlier this year. The photograph, with the Otago Yacht Club marina in the foreground, was taken from Connell St, Waverley. Photo by Gerard o'Brien.
Steel roofing trusses weighing about 100 tonnes each have been lifted into place at the Forsyth Barr Stadium in Dunedin, and the lift of a massive 700-tonne main truss may go ahead in the next couple of weeks.

Dunedin Venues Management Ltd development director Darren Burden said the first "prismatic" truss, straddling the gap between the column and the main south stand, was lifted into place on Sunday, and the second yesterday.

There had been good progress on the main truss, which was on site, and being bolted together on the site of the stadium's pitch.

Once the two pieces of steelwork were secured, the columns would be able to support the main truss, which would span the gap between the two columns, Mr Burden said.

The lifting of about 700 tonnes of steel into place 35m above the ground - one of the most difficult stages of the project - was understood to be the highest such a weight had been lifted in New Zealand.

Hawkins Construction senior site manager Dave James said last year the lift would take up to seven hours, and require two 400-tonne cranes lifting at once, with pinpoint co-ordination, on a day with no wind.

Mr Burden said yesterday the lift was to have been carried out late this month or in early June, but that target had "shifted a little bit", and may now be about the middle of this month.

The timing of the lift, though, depended on calm weather.

The transportation of steel for the roof, involving hundreds of truckloads, was still going on, but all of the steel required had arrived in the country, and a significant amount had been fabricated.

The roof structures for the east and west stands would be the next stage of the roofing work.

The planting of the stadium's turf was scheduled for January next year, and the ethylene tetrafluoroethylene (ETFE) roof had to be completed to a point the pitch area was cleared by Christmas.

"At the moment, we're pretty pleased with the way progress is going."