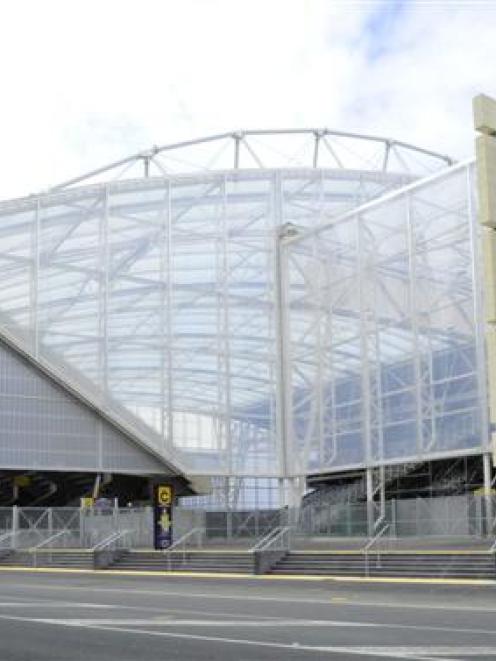 The west end of Forysth Barr Stadium and University Plaza. Photo by Gregor Richardson.
The University of Otago has questioned the inclusion of $900,000 the Dunedin City Council spent on the western wall of Forsyth Barr Stadium as "unexpected costs", saying it was part of the council's budget for the project "from day 1".

The money spent on the wall was included as part of the $8.4 million in budget blowouts revealed in the PricewaterhouseCoopers review of stadium costs released last week.

The blowouts meant the total cost of the stadium was $224.4 million.

The report states the spending on the wall "was not anticipated or budgeted for at the commencement of the project".

The overrun for the stadium also included an extra $1 million for the council's share of the University Plaza.

Otago University chief operating officer John Patrick said the university disagreed with the report, saying the money spent on the wall was part of the budget "from day 1".

"It is simply not logical to suggest that the stadium was designed and costed without a western wall," Mr Patrick said.

He said the original intent had been that the wall would be designed and built by the council, with part of the cost to be reimbursed by the university, because part of that wall would form the eastern wall of the university's building.

However, after the project began it was agreed that it made sense for the university to include it as part of its project and for the council to contribute to its cost.

"Consequently, the wall was designed by the university to take the vertical and horizontal loads put on it by the stadium and was signed off by the stadium engineers," he said.

PriceWaterhouseCoopers director Stephen Drain yesterday stood by the report, saying the council originally budgeted only a very small amount for the wall - about $15,000 - in the belief the university would pay for its construction.

The development relationship management deed signed between the university, council, Dunedin Venues Management Ltd and the Carisbrook Stadium Charitable Trust was not agreed to until after the project began, Mr Drain said.

"The arrangements with the university [including both the cost of the University Plaza and the shared wall] should have been finalised prior to the project commencing," Mr Drain said.

Mr Patrick said the original shared budget of $1.2 million - of which the council was to pay half - for the University Plaza was included in the stadium's budget without consultation with the university.

In the end, the university negotiated improvements to what was originally going to be a "plain area", with the final cost of the plaza ballooning to $4.1 million, of which the council paid $1.6 million - $1 million over the initial budget.