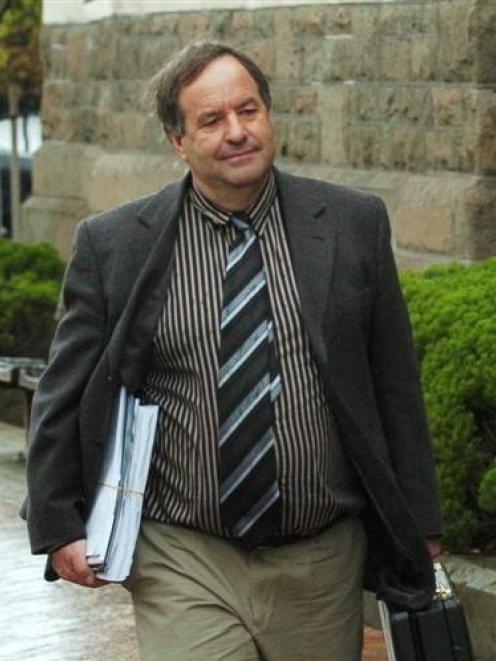 Basil Walker leaves the High Court at Dunedin this week.
Queenstown property developer Basil Walker, the man behind the latest legal challenge against the Otago stadium, confirmed yesterday he is not a ratepayer and is an undischarged bankrupt.

Mr Walker has launched legal action in an attempt to stop Otago Regional Council funding for the project, and the points questioning his status were listed in an affidavit from council corporate services director Wayne Scott to a Dunedin High Court hearing this week.

Mr Walker yesterday said his actions were made on behalf of both his family and the general public, and that his bankruptcy would not impinge on his ability to pay for any possible costs if he were to lose.

The Dunedin City Council's costs for defending an unsuccessful Stop the Stadium challenge in the High Court at Christchurch could be more than $30,000.

The judge has the discretion to award costs and the amount.

Even if full costs were awarded, which a legal spokesman said was unlikely, it would, at best, be only half of the successful party's costs.

The question would be whether the party ordered to pay the costs had the ability to pay.

A court date for a hearing of Mr Walker's legal action was on Wednesday set for June 4.

He had attempted to get an interim injunction to stop the regional council putting ratepayer funding towards the stadium.

Mr Walker contended the regional council breached its agreements in regards to the project, and claimed its processes were flawed.

It shows he disposed of his interest in the Sainsbury Rd property he used as an address for service in 2000.

"My family are ratepayers. We're as one."

He was taking the legal action on behalf of his family and the general public.

Asked if being an undischarged bankrupt might impinge on his ability to pay costs if he lost, Mr Walker said it would not.

Asked why, he said: "Next question."

He did not plan to hire a lawyer for the hearing in June.

Mr Scott's affidavit states the Otago Regional Council "is concerned that Mr Walker may be unable to give any worthwhile undertakings as to damages if an interim injunction is granted, and may be unable to pay any order for costs".

On Wednesday, Mr Walker told the court he had been to an ATM on his way to court and was satisfied there was enough in his family's working account to meet damages