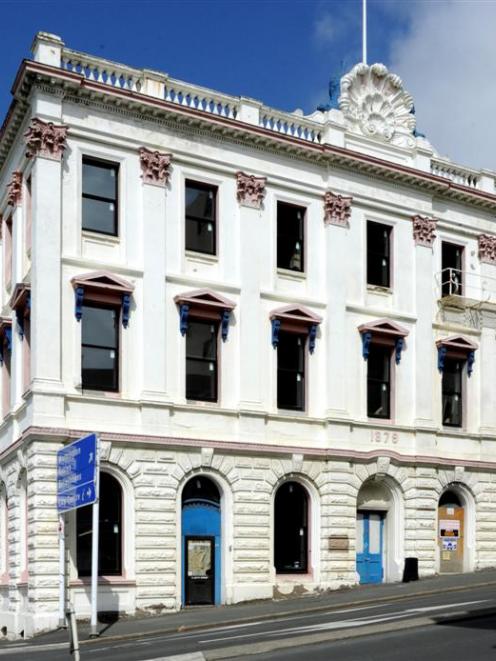 The Stavely Building, on the corner of Bond and Jetty Sts, Dunedin. Photo by Gerard O'Brien.
The owners of a historic Dunedin building damaged by a suspicious fire more than three years ago have been awarded nearly $30,000 to help pay for restoration work.

The 131-year-old Stavely Building - on the corner of Bond and Jetty Sts - was among eight recipients together awarded $124,500 in the latest round of allocations from the Dunedin Heritage Fund.

Dunedin company Purvis Investments Ltd bought the building in June last year, more than two years after its roof and interior were badly damaged by the fire in March 2008 - and later the elements.

It was announced yesterday Purvis Investments had been awarded $27,000 for the building, the largest sum distributed by the heritage fund in the latest round.

Company director Bruce Purvis said the money would help pay for work on the building's facade, including restoring doors and wrought iron work that "we know was there originally".

"It will sort of add to the heritage of the area and the building, but it's very hard to justify from an economic point of view. It [the grant] is quite useful in that regard."

The building's roof has been replaced, and work under way on the facade meant it was largely back to its pre-fire condition, he said.

Work on the building's exterior would eventually be followed by the refurbishment of the interior, with plans for 11 apartments, he said.

"Every time I go past that building it looks so much better," he said.

The heritage fund was jointly administered by the council and the New Zealand Historic Places Trust.

The latest round of eight grants included assistance to strengthen five more Dunedin buildings against damage in the event of an earthquake.

A grant of $5000 also went to the Wingatui Railway Station for a new fire protection system, and $500 for a barrier to protect the remains of a historic trout hatchery, dating back to 1868, discovered earlier this year behind Logan Park High School.

• Heritage building owners interested in a council workshop on November 23, focusing on the lessons learned from the Christchurch earthquakes, should contact Mr Hazelton at the council.