Waterfront bridge: in with the old? 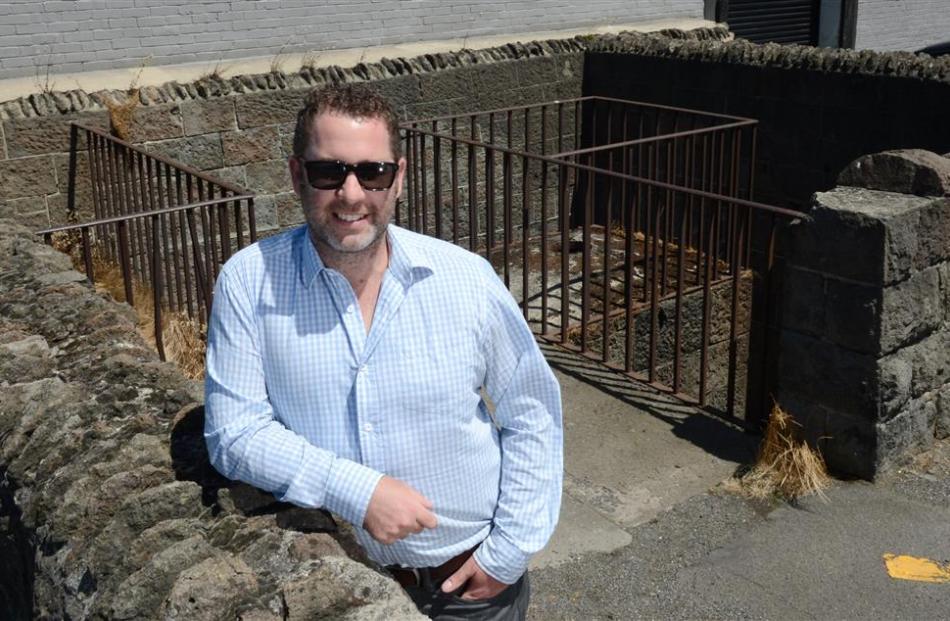 Heritage building owner Dr Hayden Cawte says two bluestone abutments, left behind after a vehicle bridge to Dunedin’s waterfront was demolished in the 1970s, could form the foundations of a new pedestrian link. Photo by Gerard O'Brien. 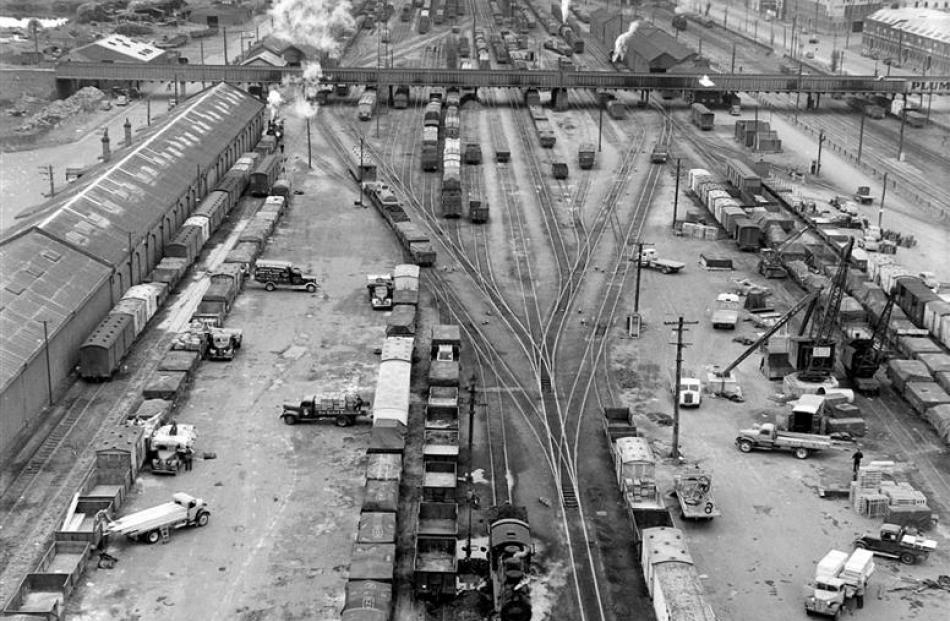 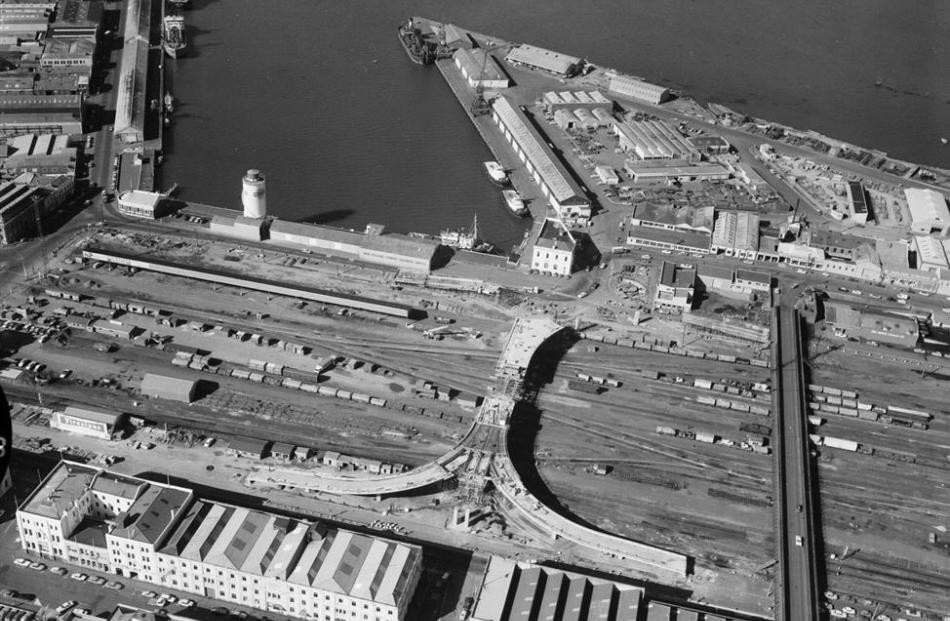 An aerial photograph from the mid-1970s shows the old vehicle bridge (right) during the construction of the Jetty St overbridge, built to replace it.

If Dunedin is serious about a new bridge to open up its waterfront, two old bluestone abutments just south of Queens Gardens could be part of the missing link, heritage advocates say.

The structures, on either side of Cumberland St, are all that remain of an old vehicle bridge that once spanned the gap from the warehouse precinct to the harbourside.

The structure, made of Port Chalmers bluestone, was built between 1883 and 1886 and demolished in 1977, one year after the Jetty St overbridge was built to replace it, Dunedin historian Peter Entwisle said.

But, according to Dr Hayden Cawte, who owns heritage buildings in the warehouse precinct, if the council was to revisit the idea of a new waterfront link for pedestrians and cyclists, the old bridge's remains might be the best place to start.

"Given it's already there, and it would be a great reuse of something that was for that purpose, anyway. That would sound quite good.''

On the city side, the bridge would end in a small, dead-end alcove off Vogel St, which is now used for car parking but was once the ramp leading up to the old bridge.

Things would be more complicated on the waterfront side, where the bridge, having crossed Cumberland St, would also have to negotiate the Jetty St vehicle bridge off-ramp and cross the rail line.

The bluestone abutment on the waterfront side was also in private hands, with industrial buildings right behind it, making any potential connection more difficult, and expensive, on that side.

But Dr Cawte said, if it could be made to work, reinstating the old bridge with a "very sleek, modern design'' connected to the old bluestone abutments could be a good option.

Such a structure would deliver extra foot traffic directly from any waterfront development into the heart of the redeveloping warehouse precinct, unlike earlier talk of a bridge crossing beside the Chinese Garden.

"Anything that gets more people flowing between two places is better. I'd much prefer it entering into the warehouse precinct itself, rather than cutting through the Queens Gardens there.

It could be a cheaper option than building a new structure from scratch, and the bluestone bases of the old bridge were likely to be "up to the job'', he believed.

"Stone structures tend to be a lot stronger than people think they are ... I wouldn't have thought there would be an issue with it.''

Mr Entwisle was also enthusiastic, saying reinstating the bridge "would not be a bad idea at all''.

The original had been built as compensation for the arrival of the railway, which divided the city from its waterfront.

The bridge originally carried horses and carts, and later vehicles.

It had iron pillars supporting its weight in the Cumberland St carriageway and was low.

Vehicles sometimes became stuck under it or collided with the pillars, leading to the decision to replace it, he said.

The pair's comments came after the Dunedin spokesman for a group considering a five-star hotel opposite the Dunedin Town Hall said he was also interested in a four-star hotel development at Steamer Basin.

However, a bridge or some other form of pedestrian and cycling link from the waterfront to the central city was the biggest challenge to be overcome if the project was to proceed, he said.

Dunedin Mayor Dave Cull said when contacted the council remained open to the idea of a bridge or other connection to the waterfront, and to paying for one, if need be.

All options would be on the table when discussion turned to the bridge again, including the idea of using the old bluestone abutments.

Mr Cull said he could see the appeal of the more direct route into the warehouse precinct, although he was not sure the cost and engineering challenges would stack up.

Whatever connection was pursued, one thing was clear - a link would be "critical'' to any future waterfront development, he said.

When it would be needed was "a matter of chicken and egg'', he said.

"What do you do first? Do you put the connection in and hope that it encourages development, or do you wait for the development to kick off and say ‘right, we've got to connect'.

"The bottom line is it's long been recognised that it will be essential, if and when any harbourside developments get going, especially any accommodation ones.''

The council previously had funding in its budget for a bridge, but removed it in 2011, along with all other discretionary capital spending, as part of an austerity drive.

A bridge proposed as part of a 27-storey waterfront hotel and apartment tower was also scrapped when the company behind the project, Betterways Advisory Ltd, withdrew from the project in 2013.

Hopes the project could proceed were revived last year, when council staff indicated a $3million grant from the Government's Urban Cycleways Fund might be used to build a bridge.

Those hopes were dashed last October when the council instead committed the funding to central city cycleway connections, and not a bridge, as part of a revised cycleways budget.

However, council infrastructure and networks general manager Ruth Stokes yesterday indicated a connection - be it a bridge or something else - was still firmly part of the council's thinking.

Staff expected to spend the next year considering options and talking to stakeholders, including the New Zealand Transport Agency, which might help pay for it, she said.

That could still mean the council's timetable to build something would align with the development of any Steamer Basin hotel, but the process needed to be worked through, she said.

"Certainly the link isn't off the table. It's just about when's the best time to be progressing the work.

"All those discussions would have to be had, but we really need to start with where does it need to go to and from and what should it look like.''