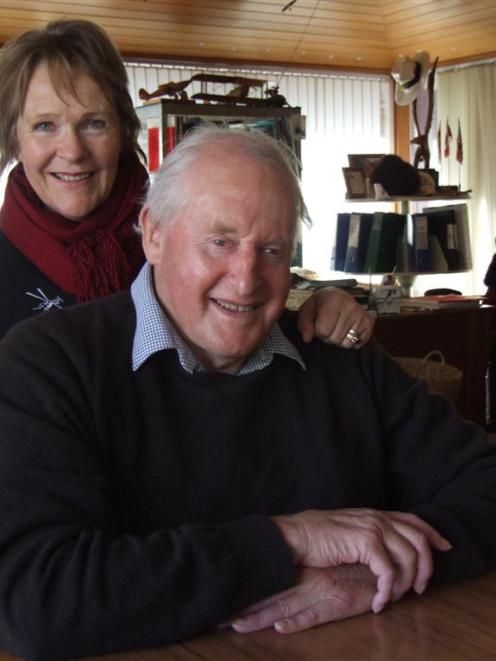 The pair have lent their voices to a campaign to keep Dunedin Hospital's neurosurgery service intact, as an independent panel appointed by Director-general of Health Stephen McKernan deliberates over where to site South Island services.

Sir Tim and Lady Wallis know a lot about fighting to overcome the hardships families face when confronted with a severe head trauma injury.

Sir Tim suffered a massive "closed-head and brain injury" when he crashed his Spitfire fighter plane at Wanaka Airport 14 years ago and subsequently spent two months in a coma in Dunedin Hospital's neurosurgery ward.

He was flown to Taieri airfield after the crash, where a specialist neurosurgery team intubated him and transferred him to the hospital.

His case is still used as a textbook example for training health professionals and his recovery from the injury continues to astound medical specialists.

Immediacy of care was paramount for anyone who suffered a serious head or brain injury, Lady Wallis said.

However, while the speed of delivery for neurosurgery treatment was the first "vital" factor for patient care, recovery from a severe head or brain injury was helped by a patient having those closest to them by their side, she said.

Basing a South Island neurosurgery service solely in Christchurch would jeopardise the welfare of many head-injury patients because of the time it would take to access those services.

It would also add to the stress those patients' families were already under because of the huge distances they would be required to travel to be with them, she said.

"We were lucky because we could drop everything to be with Tim. A lot of families are not in that situation," she said. Sir Tim's proximity at Dunedin Hospital had enabled family to be at his bedside, while city-based business colleagues had "often called by every second day" to spend time with their comatose friend.

Sir Tim said he remembered nothing of the incident. His Dunedin-based neuro-psychologist at the time, the late Barry Longmore, once described Sir Tim's recovery as "beyond explanation".

Asked what he would say to those making a decision about whether to cut Dunedin Hospital's neurosurgery service, Sir Tim said caring for people and their families was the most important thing.

Lady Wallis implored the decision-makers to think about the immediacy of care neurosurgery patients required.

"Please don't take this service away from us. We need it," she said.