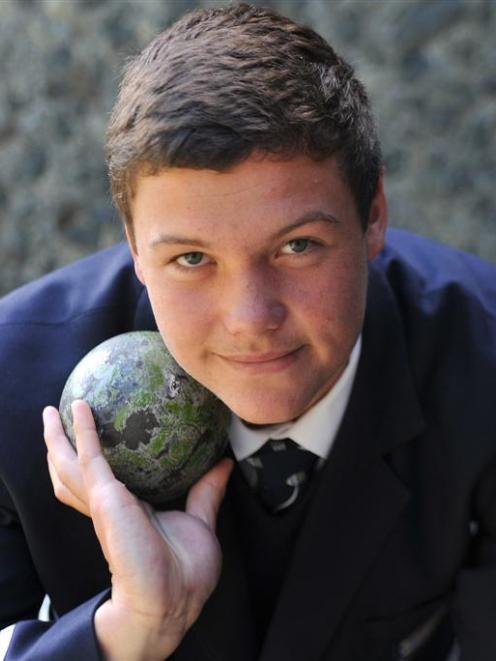 Record-breaking shot putter Hugh McLeod-Jones (17) at Otago Boys' High School this week. Photo by Gregor Richardson.
Hugh McLeod-Jones does not have the square shoulders of Tom Walsh or the massive barrel chest of Jacko Gill.

But he is awfully strong and uses his explosive speed to launch the shot put, javelin, discus or hammer as far as he can. And that is a long way.

Two other long-standing records tumbled on the day.

But McLeod-Jones stole the show with his big throw.

''I've been training with my coach, Howden Finnie, since I was perhaps 12 and have worked on my technique and speed training.

''You want to be as flexible and as dynamic as possible when you are throwing. A lot of people are shaped like bricks and rely on brute strength.''

Breaking the 43-year-old record was a thrill. He had hoped to break a senior record while at school but thought it might come in the discus or javelin, his favoured events.

''It was pretty cool to get a record under my belt. I wanted at least one and it was either that or discus.

''It is funny because shot put is not my best event ... so I was happy and surprised about that, to be honest.''

The discus record came in the weekend at the Caledonian during the Otago secondary school championships.

He broke the senior boys' discus record with a throw of 44.14m.

McLeod-Jones' next meet is at the national track and field championships in Wellington this weekend where the country's best athletes will compete for honours.

''I'm hoping to medal in javelin and discus.''