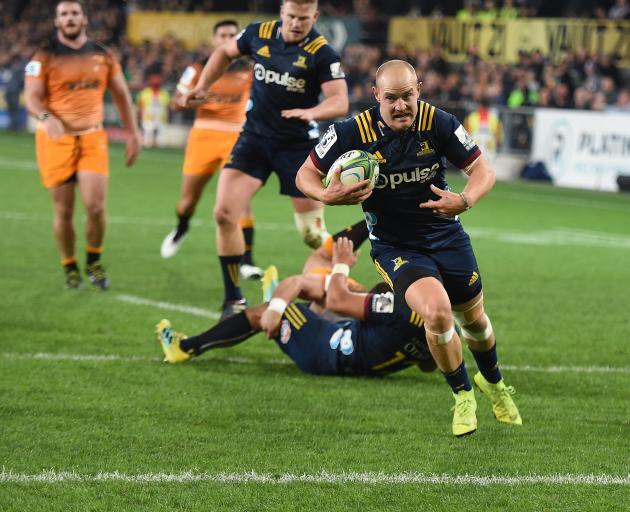 Matt Faddes scores under the posts against the Jaguares in a Super Rugby game at Forsyth Barr Stadium in Dunedin in May. Photo: Gregor Richardson
In 2004, the Otago Daily Times began a series to profile the rising stars in Otago secondary school sport. The series was called The Fast Lane and it remains a feature of our secondary sport page every other week. But where do they all go? How many of them crack the top? As another school year draws to a close  Jeff Cheshire looks back at the 2009 class.

Then: A multi-talented athlete, Pelasio had shone across various codes. He attended a New Zealand junior elite touch camp, played senior softball aged 14 for Ellis Park and played representative rugby for Otago as a loose forward.

Now: Pelasio continues to have success across his codes. He has played touch for New Zealand, as well as being part of many successful Otago teams. He has played premier rugby for Alhambra-Union and for London Welsh in England.

Then: Dodds was beginning a triathlon career and had several impressive results, including winning the Phyzique Triathlon in Wanaka.

Now: He has remained very active between running for Caversham, doing mountain bike competitions and also staying involved in multisport.

Then: Hood had just returned from the Australian Youth Olympics Festival where he played for the New Zealand under-18 basketball. A ‘‘tweener’’ size-wise, he was working on transitioning from a power forward to a shooting guard.

Now: He spent two seasons playing at the College of Coastal Georgia in the United States, before returning as an Otago Nuggets squad member. He was named Dunedin club basketball’s most valuable player in 2016 playing for the Andy Bay Falcons, before relocating to Sydney later that year, and is now travelling overseas.

Then: Woodhouse won a medal at the Pacific Schools Games as part of the New Zealand 4x100m relay team and won a national silver medal with the Otago under-16 team. A talented sprinter, he felt relays were where he had a chance to break on to the international stage.

Now: He continued to have success on the track through school and played premier rugby for Dunedin, although battled several injuries. He still competes in Wellington, where he now lives. 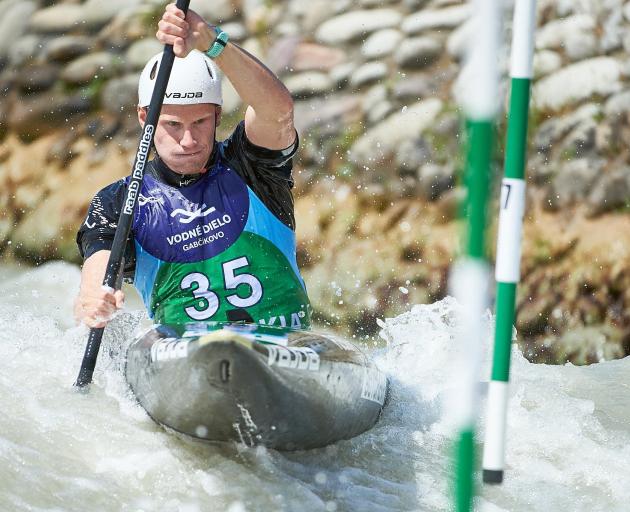 Finn Butcher on his way to 13th in the men’s K1 at the canoe slalom World Cup in Slovakia in June. Photo: MARIAN TRIZULIAK PHOTOGRAPHY
Finn Butcher (Dunstan High School)

Then: Butcher won the under-14 K1 title at the recent New Zealand open whitewater slalom championships, as well as five titles at the national secondary school championships.

Now: He competes on the world stage and last year finished fourth at the under-23 canoe slalom world championships. He was on the cusp of making the final at a World Cup event earlier this year.

Now: Bailey competed in the canoe slalom junior world championships twice, making the semifinals in 2012, while also winning a silver medal at the Australian Youth Olympic Festival. She has worked as a sea kayak guide in various places and leaves for her second summer in the Antarctic this weekend. She is also completing an environmental management degree at the Southland Institute of Technology.

Now: After moving to Wellington for university, Cadzow now lives in London and plays netball for Cumberland in the English Premier League One — the league below the top-tier Super League.

Then: Patchett was selected for the New Zealand women’s ice hockey team as a 14-year-old and went to Australia for a training camp and four games.

Now: She played for the Ice Fernz at the world championships and moved north where she represented Canterbury. Believed to be living in London.

Then: He had been selected for the New Zealand under-16 futsal team to travel to China.

Now: Last heard of in Wellington working as a software developer.

Then: Horwell won the Otago under-18 bowls championship as a 13-year-old, just 18 months after taking up the sport.

Now: He continues to bowl with success for Kaikorai. This year he won the Bowls Dunedin champion of champions regional pairs title with brother Jonty, while having previously represented the South Island.

Now: Uttley went to the Youth Olympics in 2010 and missed qualifying for the 3000m final — top 10 — by one place. She gave up running to restore life balance, which she said was a good decision in hindsight. Now married and working as a registered nurse in Tauranga, she continues to run socially and plays indoor football to keep fit.

Then: He had become the first Otago fighter selected for the New Zealand kickboxing world championships team. Fighting in the 81-86kg weight category, he had a record of four wins, three losses and two draws, while finishing runner-up at the national championships.

Now: Retired from kickboxing aged 19 after six years in the sport. Still in Dunedin and works with children running after school care and holiday programmes.

Then: Faddes played for the Otago Country senior rugby side as a 17-year-old, while being selected in the New Zealand secondary school wider squad — pending the final cut.

Now: He played 50 matches for Otago and spent four seasons with the Highlanders, while also playing sevens for New Zealand. Left earlier this year to play for Ulster in Ireland.

Then: He made the New Zealand secondary schools orienteering team, having placed at national events multiple times.

Now: Cambridge is believed to be in Wanaka, and was the race controller for this year’s multiday length race at the national championships at Mt Iron.

Then: Raal made the New Zealand junior squash squad for the 2011 world championships.

Now: She continued to play at university and reached a B1 grading. She no longer plays competitively and works as a nurse in Dunedin, although is moving to Australia next month.

Then: Wilson played for the Dunedin Thunder as a 16-year-old, as well as being picked for both the New Zealand under-18 and under-20 ice hockey teams.

Now: He still plays for the Thunder, and has also represented the Ice Blacks at the world championships. He works as a dog handler for the police.