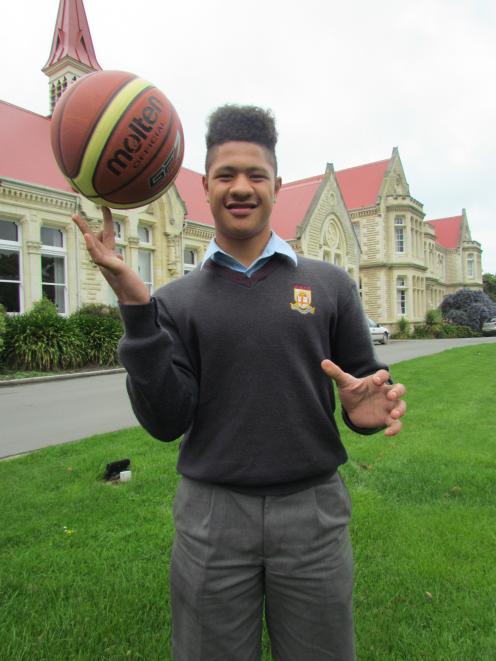 Waitaki Boys' High School basketballer Nale Fifita is aiming for the top. Photo: Hayden Meikle.
North Otago has produced some very handy basketballers over the past couple of decades - but this bloke could be the best of the lot.

Brian de Geest remains the godfather of Oamaru hoops; Ian Cathcart is now following in his footsteps as a talented coach; and the likes of Dan Peck, Gareth Dawson, Mitch McRae and Harry Thorp have all emerged from the Waitaki Boys' High School factory line.

The year 10 Waitaki Boys' pupil, who recently turned 15, has been named in a New Zealand under-16 select team to tour Australia next month.

The skilled forward trialled for the national side in December at the age of 14. While he missed out on the top squad, his abilities have been recognised with selection in the back-up squad for what should be a decent opportunity to progress his hoops career.

The select team has been invited to a Melbourne tournament, the Medibank Classic, on June 8 to 13.

Included in the team is Michael Ruske, from the prominent Otago basketball family.

Fifita told the Oamaru Mail late last year he was ''shocked'' when he got the call-up to the New Zealand under-16 trials.

Standing about 1.85m tall, he loves to attack the rim and get physical in the paint.

Like any good young sportsman, he has been soaking up the advice and guidance of coaches - in this case, de Geest and Cathcart, a Waitaki Boys' dean and basketball academy coach.

''I've learned a lot from them - just to be humble, work hard, and practise lots.''

Fifita has also dabbled in rugby, at No8, but it seems basketball could be his ticket to an elite sporting future. He plans to do as well as he can at school before, hopefully, pursuing a college hoops career in the United States.

The youngster was still ''very raw'' but was developing nicely, Cathcart said.

''We are really working on developing his fundamental skills further. He's a natural-born leader, which is very powerful in any sport.

''He's got a long way to go to reach his goal of attending college in the USA, but this will definitely help his progression, along with his involvement in Mark Dickel's Mainland Eagles academy.''