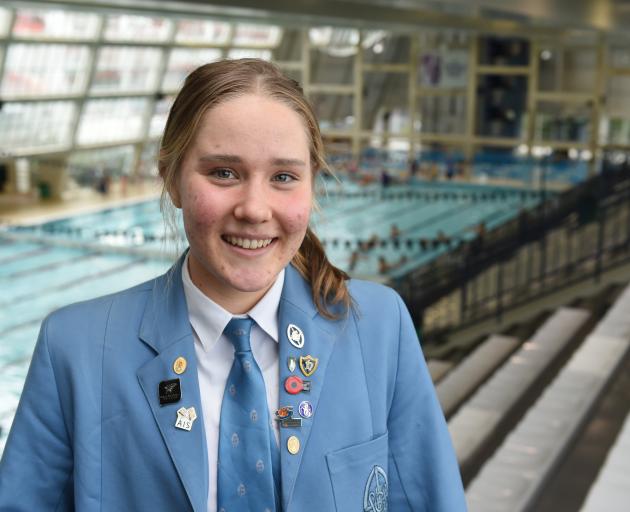 Year 12 St Hilda's Collegiate pupil Cecilia Crooks (16) at Moana Pool last week as she prepares for the busy months ahead. Photo: Gregor Richardson
Cecilia Crooks has big goals and is well on her way to achieving them.

The 16-year-old year 12 St Hilda's Collegiate pupil is one of Otago's most promising swimmers and has a big finish planned for 2017.

The events lead up to December's Commonwealth Games trials, which double as a chance to qualify for the Oceania Games, being held in Papua New Guinea next June.

She hopes to produce some top results, aiming to qualify for the Oceania Games and bring home some medals and personal bests.

That would follow on from plenty of success on the national stage, having won nine national secondary school medals, including two silvers last year.

On top of that she has had plenty of successes while swimming for Neptune and also placed in the top 10 at the Australian national championships last year while representing New Zealand.

Her successes have not gone unnoticed, as she was selected in last year's Swimming New Zealand talent identification squad, set up to provide a pathway to the 2020 Tokyo Olympics.

Representing New Zealand at major meetings was her goal and she says it was that which kept her going despite how hard training could get.

''There's definitely days that I wake up and I don't want to do it, but you just have to remind yourself what the outcome will be at the end.

''Missing one training session is like missing two, so it's harder to catch up. I just have to think about my goals and I'm not going to achieve them lying in bed, so in the long term it's worth it.''

The swimmer has found that as she got older, it was getting harder to fit everything in.

However, she found planning her schedule, staying focused on her goals and not being disheartened by plateaus had helped her through.

She even finds time to run, having been on the St Hilda's cross country team since year nine.

She had been placed in local races and experienced success on the track, finishing second in the 3000m at the South Island secondary schools championships this year.

But it is swimming where her passion really lies and she has no intention of slowing down.

''I definitely want to keep going with swimming until I've achieved my goals.

''You can only do swimming for X amount of time.

''So I'm definitely going to keep it up and keep trying to achieve my goals.''