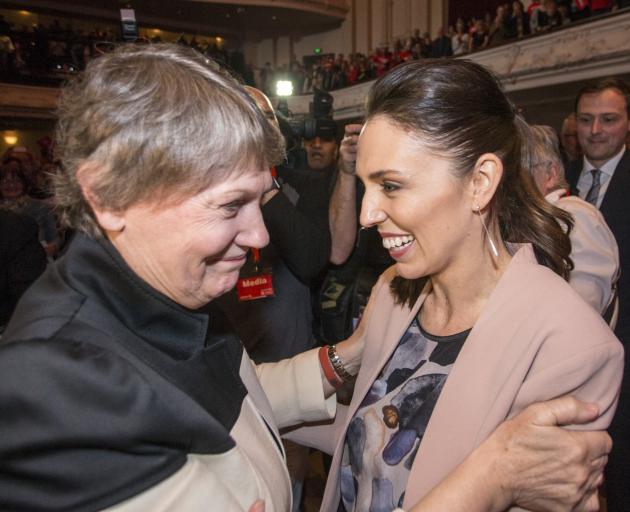 Former New Zealand Prime Minister Helen Clark has hit out after a protester accused Labour leader Jacinda Ardern of being a "pretty communist" at a farmers' protest in Morrinsville.

Hundreds turned out for the protest in Ms Ardern's hometown on Monday in opposition to Labour and the Greens' proposed water and pollution charges.

Although it was not supposed to be a political rally, some carried placards aimed at Labour and leader Jacinda Ardern - such as "she's a pretty communist'' and, on Myrtle the Tractor, "Jacinda + the Mob thinks food grows in supermarkets'' and "fart red for Labour''.

Miss Clark took to Facebook on Monday to defend Ms Ardern while taking a swing at protesters and their "misogynist'' comments.

"I took to Twitter on the latest silly attack on Jacinda Ardern. It's incredible in this day and age that a politician calling for responsible action to address our damaged water and climate ecosystems is denigrated in this way,'' she wrote on Facebook.

"I have a sense of deja vu: the same forces of reaction carped throughout my time as a leader,'' Miss Clark said.

"Hope most Kiwis have moved on from misogyny and climate change denial.''

This kind of silly attack on @jacindaardern takes me back years. Let's hope most #Kiwis have moved on from misogyny & #climatechangedenial: https://t.co/hF4tVADzva— Helen Clark (@HelenClarkNZ) September 18, 2017

Despite the incident, rally organiser, local farmer and Federated Farmers representative Andrew McGiven said the high turnout showed farmers were sick of the bad rap they were getting in the lead-up to the election on Saturday.

"We are not easy pickings for politicians and their taxing strategies," he said.

"By taxing farmers out of the game this is not the right way of addressing these issues.

"Extra taxes will delay any return to profitability and have a detrimental effect on our communities.

"Let's face it, you can't be green if you're in the red - and even vegans need farmers.''

He invoked Fred Dagg: "If it weren't for your farmers, New Zealand, where would you be.''

Mr McGiven ended with a plea to "our urban cousins'' to try to understand farming more.

"New Zealand is too small to have a rural-urban divide.''

Yes, it is, but the protesters were Rural, with National Government representatives. Helen Clark is right. They will abuse women in power because they can't fault their political skills. The only 'communist' of recent times is with the Nats, a tutor once in the People's Republic.

Since posting, it is clear that the Labour leader is not unduly bothered. I'm not too shook on angry Nats on tractors, but have highest regard for Rural women, including the CWI.