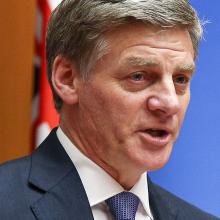 The existence of a "secret'' coalition document has again dominated debate in Parliament with National saying it shows the extent of NZ First's influence in the Government.

Deputy Prime Minister Winston Peters confirmed the existence of the 33-page document after the official coalition agreement was published, promising it would soon be released.

Since then Prime Minister Jacinda Ardern's office has refused an Official Information Act request, saying it was not an official document but a collection of policy ideas that might or might not be developed.

"Does it contain, as speculated, a New Zealand First effective right of veto over all appointments and over the Budget?'' he said.

Mr Peters has previously described National's claims about the document as "balderdash''.

Mr English later told reporters National would continue to demand the release of the document.