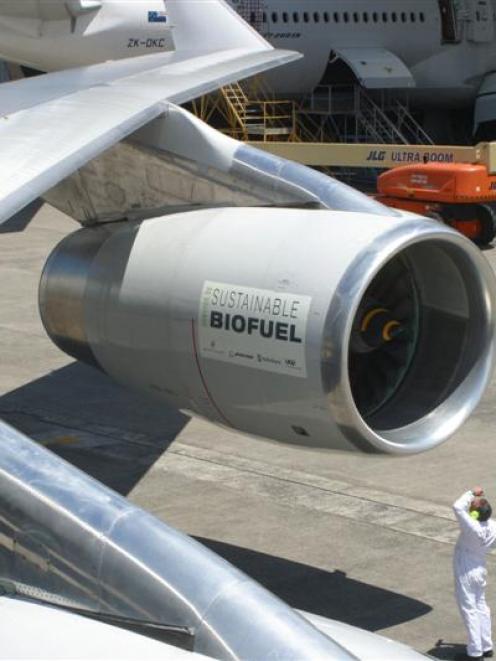 More than a dozen performance tests were made during the two-hour flight over the wider Hauraki Gulf area, which took off at 11.30am from Auckland International Airport.

The tests were completed at various altitudes, under a variety of operating conditions.

"This was the first ever flight using jatropha as a fuel source, which sets a significant precedent," said Mr Morgan.

"I'm absolutely thrilled with how the flight went today ."

He explained they were actually able to shut off the engine at 18,000ft and 25,000ft and re-start it with no problems.

"One of the major checks we did was acceleration checks, where we closed the thrust lever and then rapidly advanced so the engine accelerated in the expected time frame. As we came down at 25,000ft and 18,000ft we actually shut the engine down and re-started it.

"It was a novel event and we were absolutely delighted to be able to achieve it," Mr Morgan said.

Mr Morgan, general manager of airline operations and chief pilot, has been flying for Air New Zealand for the past 23 years.

H e explained it was too early to tell how much money could be saved by using this jatropha-based fuel on a commercial long-haul flight.

"What we were doing today is the culmination of 18 months work to prove the concept and viability of jatropha-based fuel.

"Commercialisation of biofuel is something which we and our partners will have to think about in the coming months. In any case, that's probably two to three years away from actually happening. We won't have any sense of the commercial viability for some time yet," Mr Morgan said.

Over the next few days, engineers would thoroughly assess the engine and fuel systems, looking for any changes from the use of biofuel. All the results will then be reviewed to take a step closer to having jatropha certified as an aviation fuel.

The flight was part of a series of trials taking place at airlines around the world, testing different types of biofuel as a sustainable alternative to the fossil fuel-based Jet-A1 fuel.

The test flight was a joint initiative between Air New Zealand, Boeing, Rolls-Royce and Honeywell's UOP, with support from Terasol Energy.

"It is Air New Zealand's long-term goal to become the world's most environmentally sustainable airline and we have today made further significant progress towards this," Mr Fyfe said.

"This is an historic day for aviation and I'm proud that our national airline is working with world-leaders in their fields to develop more sustainable fuels for aircraft.

"As New Zealanders, we can feel immensely proud of the innovation and research that has taken place to ensure the world's first test flight using jatropha biofuel has become a reality," Mr Key said.