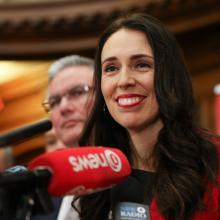 Jacinda Ardern. Photo: File
Labour leader Jacinda Ardern gave the speech of her life yesterday,  one which was considerably short on detail but long on aspiration and hope.

Ms Ardern, only three weeks into the job of lifting Labour to a win  in the September 23 election, evoked Labour leaders from the past — from Michael Joseph Savage and Peter Fraser through to Helen Clark — to help cement her credentials as a Labour leader worth electing as prime minister.

She talked of a photo she had with her grandmother and former prime minister Norman Kirk which hangs on her wall. Her grandmother was the secretary of the Piako Labour Electorate Committee.

With much focus on the leaders of the two major political parties in recent elections, Ms Ardern needed to deliver a speech which would ignite  party supporters and those  on the edge of voting for Labour.

She started by acknowledging the death of rugby great Sir Colin Meads before moving on to acknowledging her mother’s presence in the audience and her sister watching the speech online from London.

Ms Ardern also paid tribute to Andrew Little, the man she replaced, to much applause from the 1200 people packed into the Auckland Town Hall.

Another 500 supporters were in the overflow hall and a further 300 were in the Q Theatre.

"When we booked the Town Hall, we did not expect this. The reaction is overwhelming and heartwarming," she said in one of the few unscripted parts of her address.

The speech would also help undermine further the Green Party with its strong focus on the environment and global change.

Her father had commented he knew about climate change because of what they showed him in Kiribati.

But they were wrong, Ms Ardern said.

"We will take climate change seriously because my government will be driven by principle, not expedience. And opportunity, not fear.

"This is my generation’s nuclear-free moment and I am determined we will tackle it head on."

New Zealand rivers were dying and the majority were almost too dirty to swim in, she said. But she did not accept it was just the way things were, not when water was a taonga.

Labour would clean up the rivers for the next generation and she called on everyone to be part of the cleanup.

The only monetary figure mentioned in the speech was the $50million the party wanted to allocate to put a nurse in every public high school across the country. The rest of the speech covered Labour’s dearest-held policies but no figures were mentioned.

The research and development tax credit would be reintroduced. Education would be free. Labour would remove speculators’ "unfair" tax advantages; stop foreign buyers who had no interest in New Zealand buying existing homes; and it would build more houses.

Those who genuinely chose to rent deserved to know their home was warm and dry. They also deserved greater security, something Labour would provide.

Labour would also be an active partner in the regions, Ms Ardern said.

A Labour government would not tell the regions what to do but would sit down with councils, employers, unions and employees to figure out ways to support the growth of decent, well-paid jobs.

On economic matters, Ms Ardern said she would never question the importance of a strong economy but the successful economy was one that served people, not the other way around. That meant judging things differently.

Gross domestic product growth rates and numbers on a sheet of paper did not always say much about the wellbeing of the people working to keep the economy going.

How someone in Whanganui felt about their wages, their cost of living and their prospects mattered more to her than the praise of overseas financial commentators, she said.

"I want economic success to feel real and it won’t feel like anything but faint praise until it feels real for all New Zealanders.

"That is why the markers of success have to change, and I am starting with the kids."

Labour would change the Public Finance Act so that every Budget was not just about surpluses and deficits. People would hear about how many children had been lifted out of poverty, she said to loud applause.

A party spokesman said the public policy announcement, at the Edgewater Fan on the Tauranga waterfront at 10.30am would cover road and rail.

Ms Ardern is expected to visit Dunedin later this week.