Breakthrough in fight to save kakapo 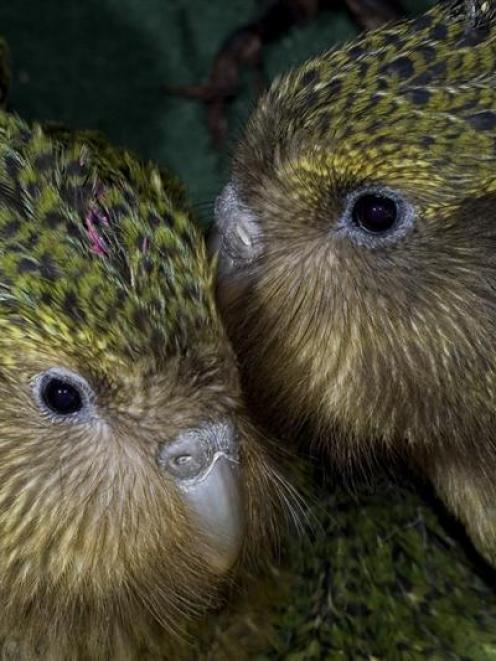 Two five-month-old kakapo chicks are the result of artificial insemination. Photo by Darren Scott.
A major breakthrough in the fight to preserve the critically endangered kakapo has been made, with paternity tests revealing artificial insemination has produced two chicks, the Department of Conservation says.

"This is a major breakthrough for the recovery programme."

Infertility as a result of the small size of the kakapo population and inbreeding had been a major problem for the birds on Codfish Island.

"Successful AI means we have a tool to improve fertility rates and minimise the loss of genetic diversity within the small but growing kakapo population."

Six females were inseminated, each with a "cocktail" of sperm from the three male birds who were the least related to them.

In the successful cases, fresh sperm, refrigerated for two to five hours, was used.

"There are several males who dominate the gene pool. Now we can collect sperm from other males and improve their odds of producing offspring," Ms Vercoe said.

The six birds produced nine chicks, with six produced by natural mating that took place before the insemination, she said.

Two chicks were the result of AI and the paternity of another chick was pending.

As a result of this season's success, the programme would put an emphasis on using AI with genetic material from Fiordland kakapo, she said.

Attempts to use Fiordland kakapo Richard Henry's sperm were unsuccessful because of a low sperm count, so they would now try and use sperm from his male offspring, she said.

The team would also continue to work towards using cryopreservation as a management tool as it would enable the genetic material from males to be saved and used after they died.

"The ability to store sperm longer term gives great hope for the ongoing genetic health of the species."