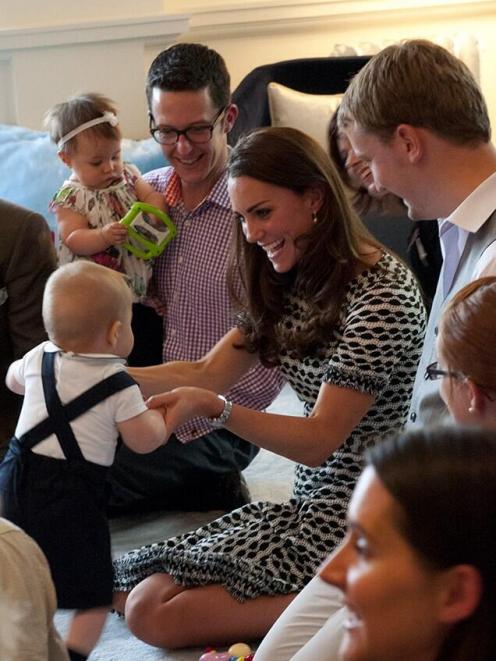 The heir to the British throne meets New Zealand children during a playdate held at Government House in Wellington. Photography by Woolf Crown Copyright.
Ten New Zealand babies are going to grow up with stories of how they played, shared toys and held hands with the future king.

The Wellington coffee group was just like countless others that happen every day, except this one was held at Government House with two heirs to the throne joining in.

The Duke and Duchess of Cambridge and baby George spent a relaxing afternoon chatting with parents of the 8-month-old tots, exchanging first-time parent stories.

Babies crawled in between legs and generally played nicely - with just a few grizzles near the end of the playdate, little Levi Birch's mum Tui Funaki said.

Toys from a Plunket toy library were piled high for the children to enjoy, but of course, children always go for the same one.

George's royal prerogative shone through when he took a shine to a wooden doll in possession of young Eden Alve. He reached for the doll, and snatched it from her, before throwing it to the floor.

He also stroked her head, causing the little girl to lose her headband, then batted her a little harder.

George's mother Catherine smiled and retrieved the doll from the floor.

The littlest royal - dressed in blue Rachel Riley dungarees and a white shirt with blue piping and a Peter Pan collar - was carried by his mother as she mingled with other parents in the room.

Kate was dressed in a knee-length black and white patterned dress, with black high-heel shoes.

Ms Funaki, a solo mum from Wainuiomata was joined by her mother Tina Birch. She said Levi held Prince George's hand "for quite a bit".

"Baby Prince George was out there playing with the rest of the babies - it was just awesome - he was just like any other regular baby."

Ms Birch said he wasn't shy about grabbing toys from the other babies.

Prince William told her he was in charge of cooking his son's meals.

"He said he mashes the potatoes and the veges."

At 3.30pm the 11 sets of parents sat in a circle on the thick carpet, the babies getting stuck into their toys while the parents talked.

At 4pm the royal family left the engagement, leaving the parents to exchange impressions on the remarkable playdate.

Jenny and Mark Stevens, with their baby Paige said it was a lovely afternoon and William and Kate were very relaxed, "which made the whole room relaxed".

"It was just like any parent group with babies in the room," Mr Stevens said.

Prince George was "really adventurous, he was all over the place and played with all the toys".

Grant Collinge and his wife Magda Gurbowicz, whose baby Lukas played with George, said the royal couple were enjoying New Zealand "except for the weather".

Porirua early childhood teacher Sheila Tagulima said George was advanced for his age - the prince was hauling himself up to standing against objects while her own son, TagiiLima, was not yet ready to stand.

When Stephanie van Heuven's daughter Amelia spontaneously burst into tears, she apologised, saying, "She's got a tooth coming through."

Kate said the same was happening to George and told her not to worry, stroking Amelia to soothe her.

"But, at the end of the day, it all comes back to, we're all in the same situation, with kids around us, doing similar things."

Mr Tunstall said the whole day had been a privilege, "just to share our babies with the duke and duchess and to have them share their beautiful one with us".