Royal watchers turn out in Blenheim 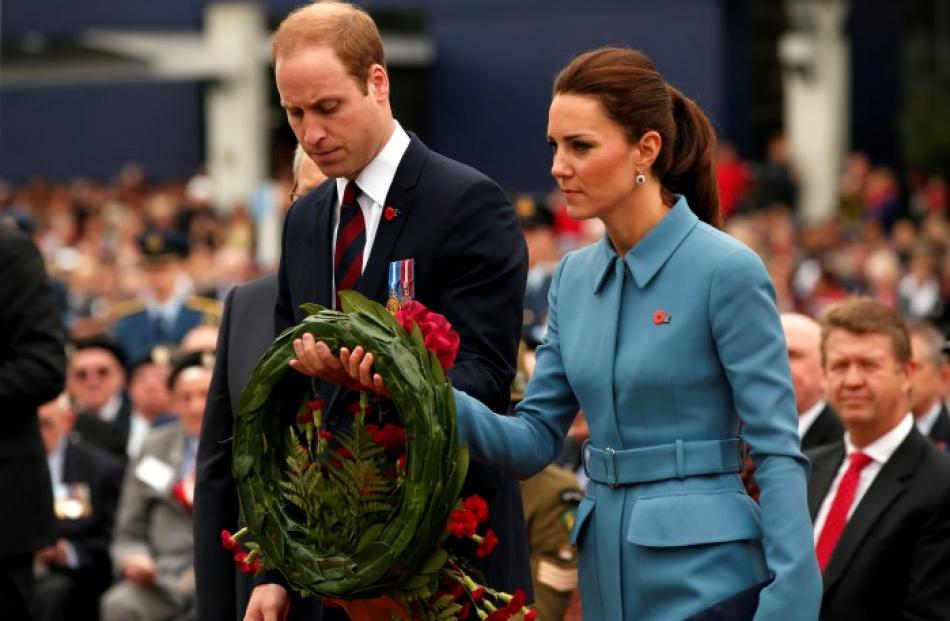 Prince William and his wife Catherine, Duchess of Cambridge, prepare to lay a wreath at the war memorial in Seymour Square in Blenheim. Photos: REUTERS/Phil Noble 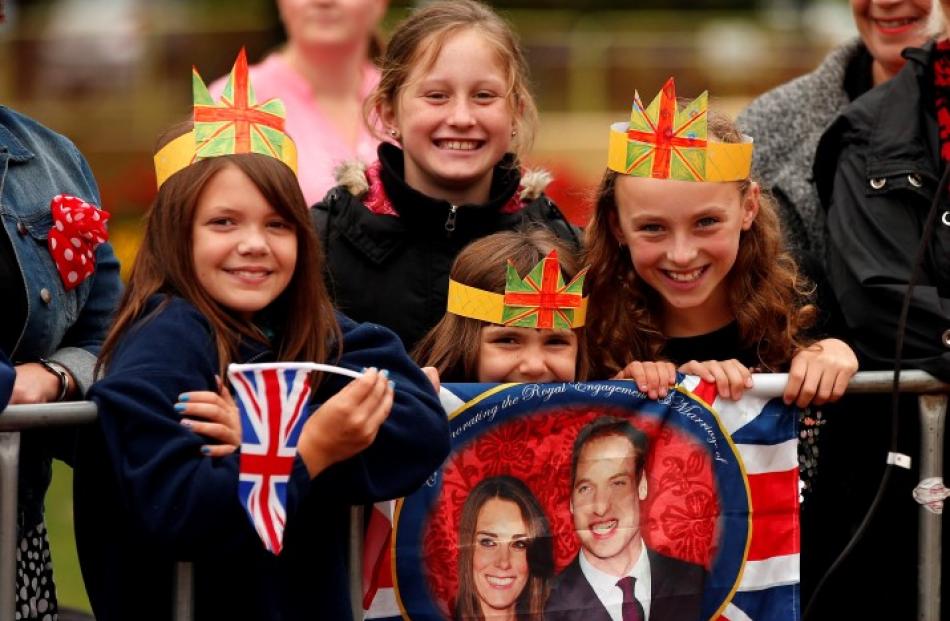 Children wait for the royal couple to arrive in Seymour Square.

An adoring crowd of fans has greeted Prince William and his wife Catherine on their arrival in Blenheim this morning.

The royal couple arrived 15 minutes after their 11am scheduled time.

Royal watchers of all ages crowded into the town to catch a glimpse of the royal couple.

Children hoping to catch a glimpse of the glamorous pair sat on their parents' shoulders while other people chose to take a perch in some of the larger trees around the square.

"Oh my God, she's wearing blue!" was a comment heard above the near rock star euphoria for the royal couple's arrival.

The duchess is wearing a blue, cotton Alexander McQueen coat, clinched at the waist with pleats at the back.

Her husband has war medals displayed on the left lapel of his navy suit jacket.

High-pitched shrieks and yells of delight welcomed them to Blenheim's Seymour Square.

Cameras and mobile phones were hoisted high above the heads to capture a regal peek.

One couple standing on step ladders called out "Who's laughing at our steps now?".

The royal couple met 10 veterans and paid their respects to the fallen World War 1 soldiers.

Crowds clamour for glimpse of royals

Ayla Simpson, 11, arrived at 6.30am to snatch up one of the prime positions at the square.

"There were only four other groups of people here, not this many," she said, excited.

Ayla, who is from Blenheim, was the first of her four friends to arrive.

The group have hung a flag of the Duke and Duchess over the barrier in front of them, and had also made paper crowns for the occasion.

Also in the crowd was Sally Small.

Miss Small and her friends had brought deck chairs and biscuits for the wait.

Many people are wearing the red, white and blue of Britain and many are waving Union Jack flags.

Lynda Day, 64, and Veronica Dugdale, 68, have come from Motueka for the day.

Seeing Kate was the main event for her.

"I remember when Diana was laid to rest and how huge that was," she said.

She is disappointed that she won't see baby George, though.

About 100 servicemen and women have been invited to the commemoration.

Mr Sowman told Newstalk ZB the day is a chance to join the royal couple in commemorating 100 years since the outbreak of World War One.

The commemoration will be followed by a visit to the Omaka Aviation Heritage Centre, where film director Sir Peter Jackson will give the royals a personal tour of his private plane collection.

William and Kate's day will conclude with meetings with Prime Minister John Key and Labour leader David Cunliffe, and a state reception at Government House.

Marlborough Girls College students Isabella Chaytor-Waddy, Georgia Lee, and Rose Asriamah - all aged 15 - were delighted to see some celebrities come to town - and get some time off school.

"No one ever comes to Blenheim so we're pretty excited to see the royals," Miss Chaytor-Waddy said.

And Miss Lee added: "Especially Will and Kate ... they're quite new. She's quite modern."

The Haydon family from Nelson, dad Shane, 21-month-old Edward, William, 5, Samuel, 3, and mum Sarah, have got into the spirit of the occasion.

Mrs Haydon, originally from England, says it's a day to support her homeland and to "feel very patriotic".

The kids even know how to do the "Royal wave".

"It's fantastic to be able to see them," Mrs Haydon says.

"We've taken kids out of school. We're doing to do a project for school too.