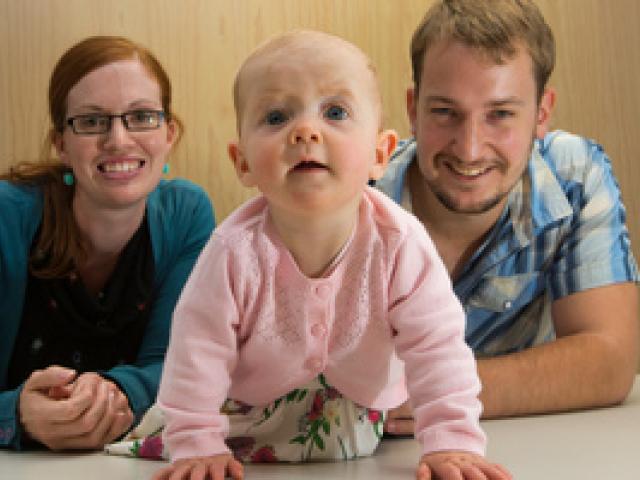 Ingrid and David Alve and eight-month-old Eden, who are to meet the Duke and Duchess of Cambridge and Prince George, at the Plunket office in Wellington. Photo / Mark Mitchell

The parents of 8-month-old Eden Alve hope she will share her toy bunny, named George, with the newest royal heir to the throne during a special playdate tomorrow.

Eden and nine other babies will join George and his parents the Duke and Duchess of Cambridge at a coffee group arranged by Plunket, to be held at Government House in Wellington tomorrow.

Governor-General Lieutenant General Sir Jerry Mateparae and his wife Lady Janine will also be at the function.

Eden's parents, Ingrid and David, were stunned when they received the call from senior Plunket nurse Tina Symes inviting them to the function.

"We were quite surprised - delighted obviously - but it was a bit surreal, a tiny corner of the country and they called us," Ms Alve said.

Eden would be wearing a "royal blue" dress made for her by her godmother.

She and George were born a week apart and through her pregnancy, Ms Alve said she would look at photos of Catherine and "compare bumps".

The couple bought a toy bunny for Eden while they were travelling through the Netherands, and after the little prince was born, they named it George.

"Hopefully George will play with it," Mr Alve said.

They were looking forward to meeting the royal couple tomorrow, he said.

"Hopefully it'll be pretty relaxed and we'll just talk to them like we do with our normal Plunket group - they seem pretty chilled out and down to earth," he said.

The parents said they would have to "play it by ear" if Eden crawled over to Prince George and planted a big kiss on him.

"The greatest thing about the event is that it's just all babies getting together and being babies," Mr Alve said.

It was a great opportunity for Eden knowing as she grows up, that she played with the future king, he said.

But they were concerned that media would focus on her and the other babies in the future because of the event.

They would not describe themselves as royalists, but did like the idea of a Monarchy.

Ms Symes was in charge of choosing 10 babies to attend the high-profile playdate.

She chose children born in July - the same month as George.

There was also an even split of boys and girls and a range of ethnicities to reflect the community.

When she called all the parents on the shortlist "nobody said no to the invite", she said.

"They were all thrilled."

- By Rebecca Quilliam of APNZ