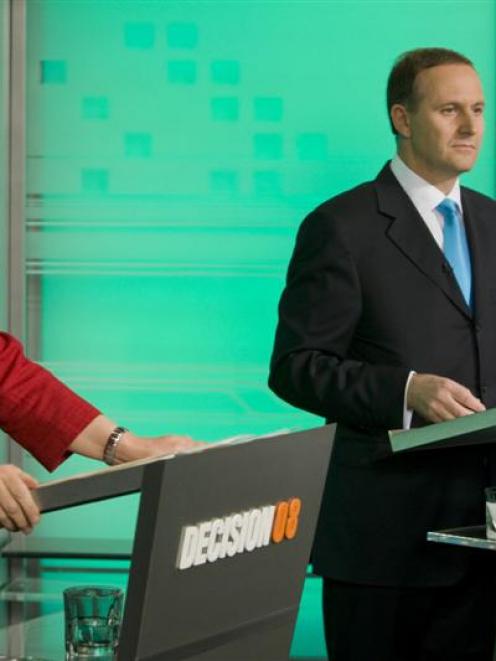 Prime Minister Helen Clark (Labour) and National Party leader John Key appear on Decision 08 - The Defining Debate on TV3 last night. Photo from NZPA.
Prime Minister Helen Clark saved her best for last during the TV3 leaders' debate last night when she could point confidently to her record of leading a government during the past nine years with five different parties.

National Party leader John Key said he had shown he had been able to work under MMP in the two years he had led his party but he ruled out having the debate in the media about potential partners after the election.

But he has already ruled out New Zealand First leader Winston Peters, and the Greens will not work with National.

That leaves Act New Zealand and United Future and the Maori Party, if the latter is prepared to talk to National after voters have made their choice.

In a tight contest, Miss Clark came out the winner on the night.

The final leaders' debate will be held on TV One tomorrow.

However, the debate degenerated into a shambles because the mediator, John Campbell, did not mediate.

Instead, he added to the general mayhem of the hour-long shouting match by trying to shout down both Miss Clark and Mr Key at various times.

Mr Campbell is experienced enough to know that both leaders were only going to answer his questions in a way that suited them, not him, and he should have been prepared for that.

He trivialised what should have been an important time for voters as they make up their mind before Saturday.

While Miss Clark could point to her strong record of leadership as prime minister, Mr Key claimed he would bring with him to a National-led government the strongest economic management of any prime minister.

That prompted Miss Clark to point to long-serving MPs Bill English, Lockwood Smith, Maurice Williamson and Murray McCully, all of whom were on former leader Don Brash's front bench.

Mr Campbell tried to tempt Mr Key into announcing who he would take into the Cabinet, claiming his top 12 MPs were as "fresh as old snapper".

Mr Key again would not be drawn, instead using his favourite phrase of "what I can tell you" when saying each leader put his or her stamp on the party and he had put his stamp on National.

Miss Clark was not questioned on her likely front bench but she should have been, given that many of her Cabinet had been ministers for nine years.

She acknowledged it was time for Labour to move on and the party had done so by developing its party list with an "incredible range of new candidates".

What was disappointing was the "me too" attitude of both leaders.

Their policies on the economy were uninspiring, there were no fresh initiatives for the likely rise in unemployment as the recession bites and there was acknowledgement of a bipartisan agreement on the bank deposit guarantees.

Mr Key claimed the Government was "storming through your door" but when challenged to find an example he struggled.

In the end, he resorted to long-life light-bulbs and shower flows, something Miss Clark swooped on.

"There are a lot of urban myths about this," she said.

"I'm a free spirit and don't like people telling me how to live my life. I would never accept a government telling me how much water to have through a shower."

Strangely, while Mr Campbell tried to express concern about the state of the economy and the effects on New Zealand, he introduced at the end of the debate a futures trading market on the outcome of the election.