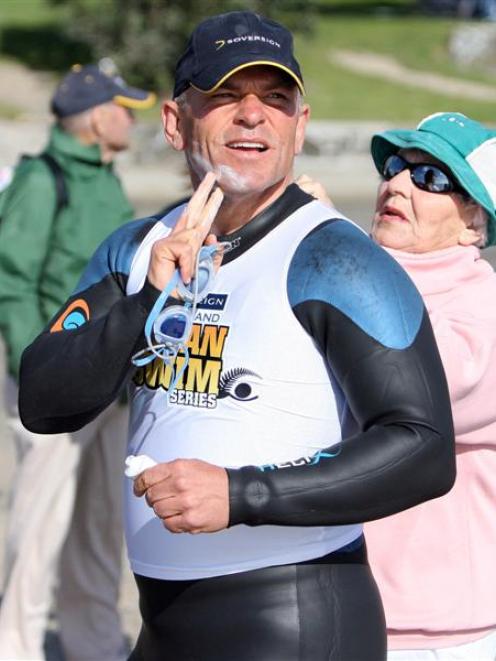 ACT Party leader Rodney Hide gets some help from his mum as he kits up to attempt to swim from Rangitoto to Takapuna Beach promoting the Ocean Swim series today. Photo by NZPA
After a call late last night from National Party leader and incoming Prime Minister John Key, ACT leader Rodney Hide is preparing for one of the biggest meetings of his political career.

Mr Hide is celebrating after being returned as the MP for the Auckland seat of Epsom, and will hold negotiations to form part of a National-led government.

Mr Hide said he would not be making any announcements or make any decisions until he talks to his party's board on Monday.

With nearly 4 percent of the party vote and five MPs to bring to a coalition government, Mr Hide is in a position to spend his political capital.

He told hundreds of cheering supporters at the Orakei RSA he had received a phone call from Mr Key telling him he was looking forward to working with him in the National-led Government.

Supporters celebrated throughout the evening, knowing ACT could play a significant role in the new coalition.

And the mood became increasingly jubilant as it became apparent the party would increase its number of MPs from two to five.

Mr Hide would not talk about the role he wanted in the new cabinet.

"We're committed to a secure and stable government, providing the country with some clarity and a sense of direction," he said.

One of the party's new MPs is ACT's founder Sir Roger Douglas, but Mr Key has ruled out having him in the cabinet.

Sir Roger told NZPA his return to Parliament meant, at the very least, adjusting his life.

` `I believe I have a contribution to make," he said.

"New Zealand is going to go into quite a difficult financial period and we're all going to have make adjustments."

There were difficult decisions to be made and the promises that had been made by the major parties were not going to help, he said.

Sir Roger said he did not represent a right-wing faction of New Zealand politics.

"I think if people actually read our policies, you can't actually say that," he said.

"We have the same goals and objectives as other political parties, we just have different means of getting there."

Sir Roger said New Zealand's financial situation was more serious than it had been in a long time and National would have to look at some of ACT's policies.

"Whatever happens you can guarantee one thing -- I'll be putting ideas on the table."

He said he was unlikely to be speaking to media after the event on any politically-related issues.