Politicians break out one-liners in Wakatipu 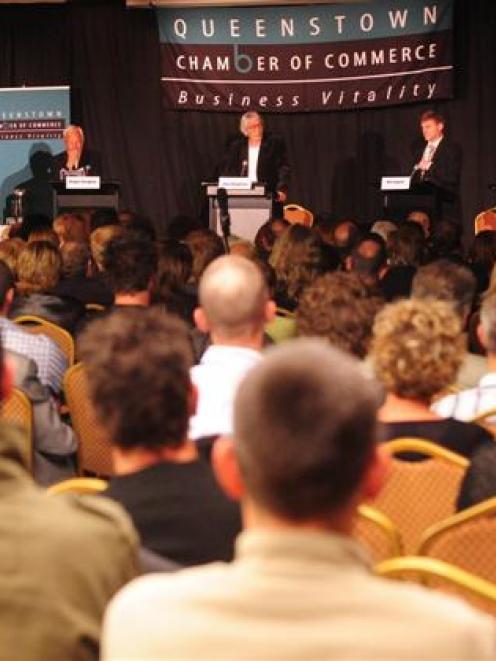 After almost two hours it was Queenstown Lakes Mayor Clive Geddes who summed it up most succinctly with the closing comments to what was the epitome of democracy in action.

"The last thing you need to have is another politician addressing you, but on the basis that these events are two-way streets, insofar as we have come here this evening to hear from the politicians . . . I hope they have come to hear something of what you have had to say."

"Close to 400 people here this evening have paid to come and hear politicians. It's a sobering thought and what is behind that is a genuine interest."

Mr Geddes said those who had turned out felt they had ownership of their community, had a say in the way it was managed and felt they were in charge of their own economy.

"People who are prepared to front on a cold, rainy night, pay 30 bucks to hear you . . . but more importantly that you take away from them the message that this town has got something you can learn from them."

Mr Geddes earned a resounding and lasting round of applause for his comments following what had been an entertaining evening in which members of the district had their chance to ask their questions.

While the state of the economy was the most common topic, one senior Wakatipu High School boy asked one of the best questions of the evening of Clutha Southland MP Bill English.

During his opening comments, Mr English said a National government would focus more on schooling of future generations with regard to literacy and numeracy - "some long-term stuff".

Caleb Dawson-Swale, possibly the youngest member of the audience, took to the microphone to ask Mr English if he could expand on what "stuff" he was referring to.

Caleb, not missing a beat, replied, "I'm from Winton."

Yesterday afternoon, Mr Peters addressed a small but receptive crowd of Grey Power members at Frankton, where about 30 people turned out to hear him.

At noon he has a lunch date with the Tourism Industry Association at the Crowne Plaza Hotel in Beach St, followed, at 1.30pm, by a walkabout in the central business district.

The best one-liners on the night

Bill English on the anti-smacking legislation: It's going to be the nanny state on P.

Russel Norman reacting after being criticised for being an Australian representing a New Zealand party in an election: Hey, I'm a citizen, mate. There are a lot of migrants in this country. Get used to it.

Michael Cullen after being asked about the proposed location of the new Frankton school: I don't have a briefing on that, I assume they're planning for future growth.

MC Jim Hopkins reacting to Dr Cullen's comment: Hold the press . . . a politician has just admitted he doesn't know something.

Winston Peters after being asked to confirm a rumour a deal had been done between New Zealand First and Labour that if NZ First did not get in, Mr Peters would be appointed Right Honourable Consul of Monaco: You came all the way tonight and that's your best shot? Sit down and be a good lad.