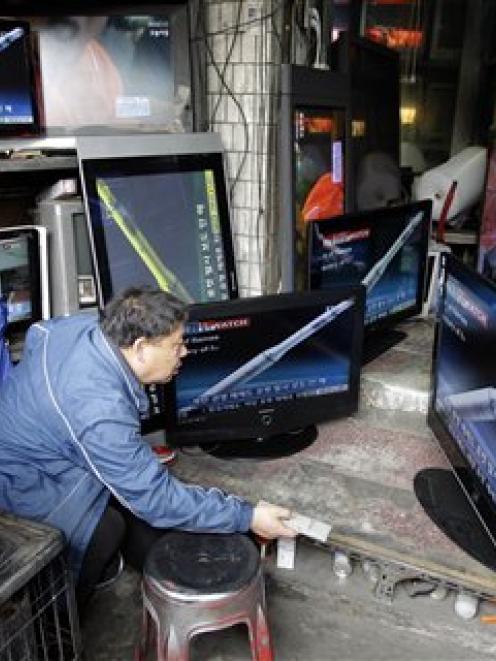 A man watches TV news showing a computer-generated simulation of North Korea's rocket launch at a home appliance retailer in Seoul, South Korea, yesterday. (AP Photo/Lee Jin-man)
A satellite launch North Korea had hailed as a moment of national pride ended in failure yesterday when the rocket disintegrated over the Yellow Sea, earning Pyongyang embarrassment as well as condemnation from a host of nations that deemed it a covert test of missile technology.

The launch is a setback for new leader Kim Jong Un, whose government had projected the satellite as a show of strength amid North Korea's persistent economic hardship. Kim is solidifying power following the death of his father, longtime leader Kim Jong Il, four months ago.

In a rare move, Pyongyang acknowledged that the rocket did not deliver a satellite, but it also pressed ahead with grandiose propaganda in praise of the ruling Kim family.

The United States and South Korea declared the early morning launch a failure minutes after the rocket shot out from the North's west coast. North Korea acknowledged that some four hours later in an announcement broadcast on state TV, saying the satellite that the rocket was carrying did not enter orbit.

North Korea had held up the launch as a scientific achievement and even a gift for its late founder, Kim Il Sung, two days before the 100th anniversary of his birth. It pressed ahead even as world leaders vowed to take action in the U.N. Security Council against what they called a flagrant violation of international resolutions prohibiting North Korea from developing its nuclear and missile programs.

The rocket's destruction suggests the country has yet to master the technology needed to build long-range missiles that could threaten the United States. Still, worries remain about North Korea's nuclear program amid reports that it may be planning an atomic test soon.

Kim Jong Un has been given several important titles intended to strengthen his rule this week. Hours after the failed launch, state media said he was named first chairman of the powerful National Defense Commission during a meeting of the Supreme People's Assembly.

Kim Jong Il, who ruled the country in his capacity as chairman of the commission, was given the title of "chairman for eternity."

Outsiders, meanwhile, focused on the launch, which was condemned by the foreign ministers of the Group of Eight industrialized nations meeting in Washington, including Russia.

The U.N.'s most powerful body, the Security Council, said in a brief press statement after a closed meeting on Friday that members agreed to continue consultations "on an appropriate response."

"We think a credible reaction is important," Rice said.

Washington said it was suspending plans to contribute food aid to the North in exchange for a rollback of its nuclear programs.

White House spokesman Jay Carney also said on Thursday before the launch that "the clear violation of U.N. Security Council resolutions that a launch of a ballistic missile would represent makes it virtually impossible for us to go ahead with" the agreed-upon package of food aid to North Korea.

The Obama administration believes U.S. sanctions against North Korea, particularly on its ability to obtain advanced electronics for guidance systems, have restricted its proliferation activities.

North Korea had announced weeks earlier that it would launch a long-range rocket mounted with an observational satellite, touting it as a major technological achievement to mark the centennial of the birth of Kim Il Sung, Kim Jong Un's grandfather.

The failure "blows a big hole in the birthday party," said Victor Cha, former director for Asia policy in the U.S. National Security Council. "It's terribly embarrassing for the North."

In downtown Pyongyang, university student Kim Kwang Jin was sanguine about the news."I'm not too disappointed. There was always the chance of failure," he said. "Other nations - including China and Russia - have had failures while building their space programs so why wouldn't we? I hope that in the future, we're able to build a better satellite."

In the U.S., Pentagon press secretary George Little said American officials believe the missile failed during the second stage of flight, but he was unable to say whether there was a controlled separation from the first stage.

"It was an obvious and very quick failure," he said.

Asked whether the failure suggests that North Korea poses less of a military threat to the U.S. than has been suggested by the Obama administration, Little said "their recent track record is not good" with regard to long-range missile technology development. But he added that this does not mean North Korea is no longer a serious threat.

"We are not discounting the possibility of advancements in North Korean missile technology, notwithstanding their failures," he said.

Experts say the Unha-3 carrier was the same type of rocket that would be used to strike the U.S. and other targets with a long-range missile.

Greg Thielmann, a former intelligence officer with the U.S. State Department, said it now appears the North Koreans haven't mastered the technology they need to control multistage rockets - a key capability if the North is to threaten the United States with intercontinental ballistic missiles.

North Korea has tested two atomic devices but is not yet believed to be able to build a nuclear warhead small enough to be mounted on a long-range missile.

Cha, who was an Asia adviser for former President George W. Bush, said the next step would be to watch whether North Korea conducts a third nuclear test, as has been speculated by the South Korean intelligence community.

State media said the Kwangmyongsong-3 satellite was fired from the Sohae Satellite Launching Station in the hamlet of Tongchang-ri but "failed to enter its preset orbit."

"Scientists, technicians and experts are now looking into the cause of the failure," the state-run Korean Central News Agency said.

North Korean space officials said the Unha-3, or Galaxy-3, rocket was meant to send a satellite into orbit to study crops and weather patterns - its third bid to launch a satellite since 1998. Officials had earlier brought foreign journalists to the west coast site to see the rocket and the Kwangmyongsong-3 satellite Sunday in a bid to show its transparency amid accusations of defiance.

The acknowledgment of the rocket's failure - both to the outside world and to North Koreans - was a surprising admission by a government that in the past has kept tight control over information. In Pyongyang, dozens of foreign journalists invited to cover the launch were not allowed to view the liftoff live.

"The failure, which was impossible to hide from the North Korean people given the advance publicity and presence of international media, will be a major source of domestic and international embarrassment for the Kim Jong Un regime," said Ralph Cossa, president of Pacific Forum CSIS, a Hawaii-based think tank.

Attempts to put satellites into orbit often pose problems even for developed nations. In 2010, a South Korean rocket carrying a climate observation satellite exploded 137 seconds into its flight. An earlier 2009 attempt, Seoul's first from its own territory, also failed.

The Unha-3's launch was monitored by a host of U.S., Japanese and South Korean military assets, which were expected to capture vital data on North Korea's ballistic missile capabilities.

U.S. Navy minesweepers and other ships in the area were expected to begin scouring the sea for debris from the rocket, which can offer evidence of what went wrong and what rocket technology North Korea has.

At a massive gathering later Friday in Pyongyang, Kim Jong Un and other senior officials watched the unveiling of an enormous new statue of Kim Jong Il, which stood beside an equally large statue of Kim Il Sung.