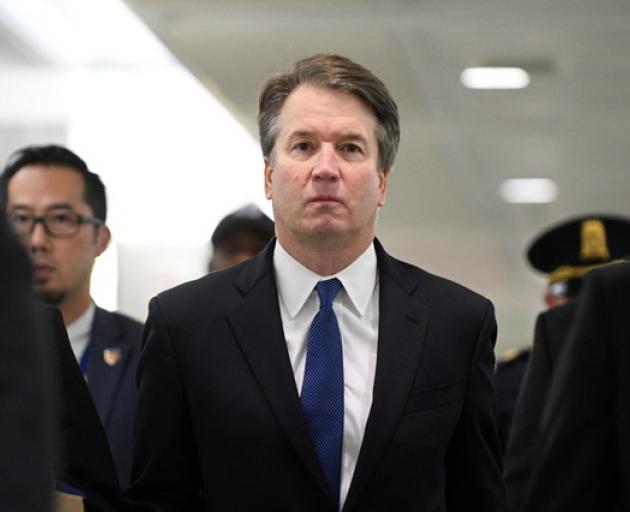 By a vote of 50-48, the Senate gave a lifetime job on the Supreme Court to Brett Kavanaugh. Photo: Reuters
A deeply divided US Senate on Saturday (local time) confirmed Brett Kavanaugh to the Supreme Court, as Republicans dismissed sexual assault accusations against the conservative judge and delivered a major victory to President Donald Trump.

By a vote of 50-48, the Senate gave a lifetime job to Kavanaugh (53), after weeks of fierce debate over sexual violence, alcohol abuse and privilege that convulsed the nation just weeks before congressional elections on November 6.

The Senate vote takes the highest US court down a more conservative path for perhaps a generation and is a bitter blow to Democrats already chafing at Republican control of the White House and both chambers of the US Congress.

Kavanaugh's nomination became an intense personal and political drama when university professor Christine Blasey Ford accused him of sexually assaulting her when they were high school students in a wealthy suburb of Washington in 1982.

Two other women accused him in the media of sexual misconduct in the 1980s.

A still image taken from video of the final tally of votes by the U.S. Senate on the confirmation of Supreme Court nominee Judge Brett Kavanaugh in Washington. Photo: Senate TV via Reuters

Kavanaugh fought back hard, denying the accusations in angry and tearful testimony before the Senate Judiciary Committee that was viewed live on television by around 20 million people.

Trump stood by Kavanaugh, a federal appeals court judge with a history of advancing Republican causes, and this week mocked Ford's account of what she says was a drunken attack on her by Kavanaugh when they were teenagers.

Trump, seeking a legacy as the president who put a strongly conservative stamp on the court, said on Saturday before the vote that Kavanaugh would do "great, great" job there.

Democrats said Kavanaugh's partisan defence of himself, in which he said he was victim of a "political hit," was enough itself to disqualify him from the court.

Repeatedly during the Senate debate, Republicans accused Democrats of staging a "smear" campaign against Kavanaugh to prevent a conservative becoming a Supreme Court justice.

The accusations against Kavanaugh energised the #MeToo social media movement that emerged after high-profile accusations of sexual assault and harassment by men in politics, the media and the entertainment industry.

Kavanaugh is expected to be sworn in quickly and will join four liberal justices and four other conservatives as the court, which is expected soon to hear controversial disputes involving abortion, immigration, gay rights and voting rights.

The dispute over Kavanaugh has added fuel to campaigning for the midterm elections in November when Democrats will try to take control of Congress from the Republicans.

Several polls show that Republican enthusiasm about voting, which had lagged behind, jumped after the Kavanaugh hearing last week.

But Democrats hope women angered at the Kavanaugh accusations will turn out in large numbers to vote out Republicans.