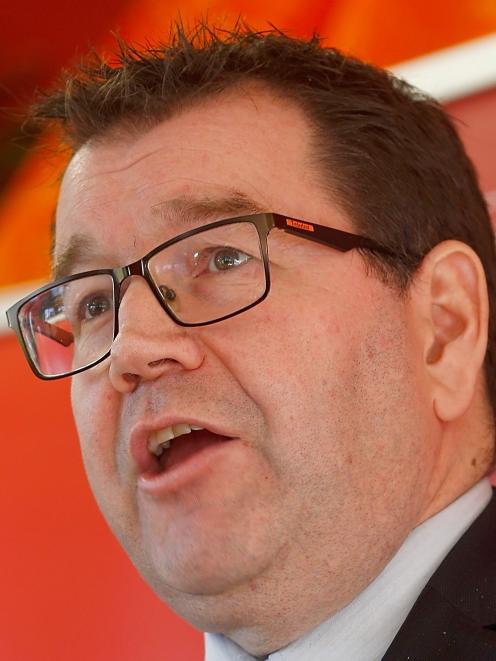 Grant Robertson
Tomorrow, with the weekend's mid-ranked parties' conferences over, Labour will have another go at getting traction.

Grant Robertson will unveil Labour's ``alternative budget''. Will he map a path to the 2020s?

This is potentially an existential question for Labour which has not done the root-and-branch rebuild three defeats suggest was needed.

But that analysis has not been turned into riveting policy for young people who must navigate an uncertain future. Leader Andrew Little (now deputy in popularity to deputy Jacinda Ardern) projects caution. Labour presents more as a 2000s ``third way'' party than designer of bold new policy settings.

That is unlikely to recalibrate the votes of middling folk doing sort-of OK in a migration-fuelled economy or to captivate young people wanting a paradigm shift from their parents' post-1980s orthodoxies.

The Greens' James Shaw does promise an environmental paradigm shift and Greens have attractive young candidates high on their list.

But will the young enrol and vote for them? The white hair count at the Greens' conference was similar to New Zealand First's. And New Zealand First sported a contingent of bright young delegates, who tell you (as do young Green delegates) they want real change from what the 1980s has bequeathed them.

Mr Shaw does irony, too. His ``green infrastructure fund'' would initially be financed by raising the oil and gas royalty 2%, so that Green-demonised sector would need to keep going a while yet.

Not ironic was co-leader Metiria Turei's confession of a welfare wangle when a solo mum law student to energise her claim that a much bigger lift in benefits (which she promised) is needed than Labour's tangled families package last week.

Also not ironic was Mr Peters' bottom-line demand of a binding referendum on abolishing the Maori seats.

But that policy is predicated on Maori being ``equal''. Yet the New Zealand First conference endorsed a specific reference to Maori in a remit composed by MPs from remits submitted by a number of electorates demanding better social services. The remit talked of the needs of ``the Maori population, and indeed, all New Zealanders''.

An amendment to remove the Maori reference (because Maori are ``equal'') was lost 81-103 after two senior Maori delegates (among a goodly number) argued that tangata whenua are ``indigenous and we are different'' and deserved respect.

There were Pasifika delegates, too. The lower-income South Auckland ``region'', where the party set up an office and held the conference, fits Mr Peters' core campaign message so far that successive governments have neglected the regions and he will make them great again.

The regions are big in the election.

The Government has teamed with the Auckland Council on a South Auckland strategy. Ministers last week were roaming provinces dishing out goodies, in line with the regional dimension in Economic Development Minister Simon Bridges' version of the ``business growth agenda''.

Mr Shaw's green fund also has a regional tinge in the placement of renewable energy projects. Labour has offered regions development money but has had little response.

But there is another ``region'': voters who want markedly different policy settings but don't want the 1970s back. That implies boldness, not the caution Labour's families package exuded.

Which turns the torch on Mr Robertson. His pitch to younger voters focuses on student support, climate change, housing quality and marijuana.

Today in a talk to public servants he will touch on wellbeing economics, the wider-than-GDP way of testing the economy against changes in natural, social and human capital.

His alternative budget tomorrow will ease fiscal stringency to get health spending up, among other things. But it will tighten tax on shifty multinationals and leave income tax rates and thresholds unchanged for now, as the families package did.

More important, Mr Robertson will restate his intention to get a working group to reshape the tax system and instruct it to seriously examine wealth and assets, including land, as tax revenue sources besides consumption and income.

That might appeal to young people grumping that baby-boomers have scoffed the wealth, even though Labour can't go as far as to tax ``bads'' like pollution and carbon emissions because it is committed to the emissions trading system.

Might that start to haul Labour out of its polling hole? Answer in two months.

Don't blow it.....you have to make money before you can spend it.....we are in surplus....so spend wisely . but where will you get it from when it runs out.....borrow from overseas... high interest on the way... then inflation....