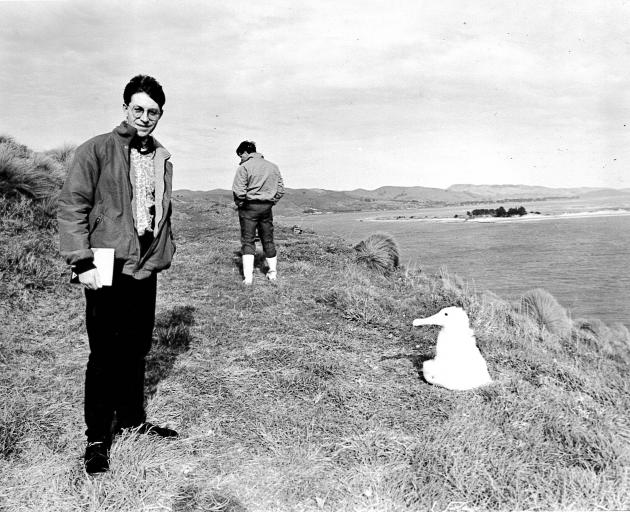 Proof I used to work occasionally. Here I am as ODT conservation and environment reporter at the Taiaroa Head albatross colony in 1991. PHOTO: ODT FILES
Well, well, well. So, what's with that indeed?

I've done everything else I have to do today (Thursday) - the letters page and the obituaries page - and left this to the last, as I wanted to savour writing our ultimate column.

Thanks for all the lovely feedback in the past few days since I let on I was heading up the road.

I seriously think, though, when you say "thank you for your wit and wisdom over the last 12 months" and you've enjoyed seeing my "smiley face each morning, you look so friendly and calm" you really are deluded and must be thinking of someone else.

I apologise if I still have any material you sent in. Rest assured it is safe on the bookshelves in this office and if you wish to come up to level 3 of the Allied Press building, someone will be around to hand it over.

I am also sorry that some of your contributions and ideas have not made it to print. Unfortunately there is only so much room on page 2. I feel spoiled I had such choice.

I'm quite chuffed to be thought of as Harry Potter. One of the daily defacings of the column carried out by my friends at the Morning Magpie. PHOTO: NIC WOOD
Writing a daily column has its share of ups and downs.

During some very busy days I felt bad about not spending more time listening to your stories. On such occasions, the words I feared hearing most on the phone were: "I could reminisce with you for hours."

It was on the day I heard myself say "so how old is your aspidistra now?" I realised I was well-ensconced in the glitzy world of an ODT columnist.

It is an honour to join, as a junior member, the group who have become part of this paper's rich tradition of readers' columns, including Prester John and Talk of The Times, Civis, and my predecessor Dave Cannan's wonderful The Wash.

Anyway, I'm starting to get a bit maudlin, so on with the show.

All this talk about how pricey petrol is spurred Neil Roy, of Moonlight, into action. He sent in two of the photographs running today.

"Attached is a copy of the receipt for a 1913 Model T Ford car that my grandfather and his bachelor brother, who farmed here at Moonlight, bought new in Oamaru. 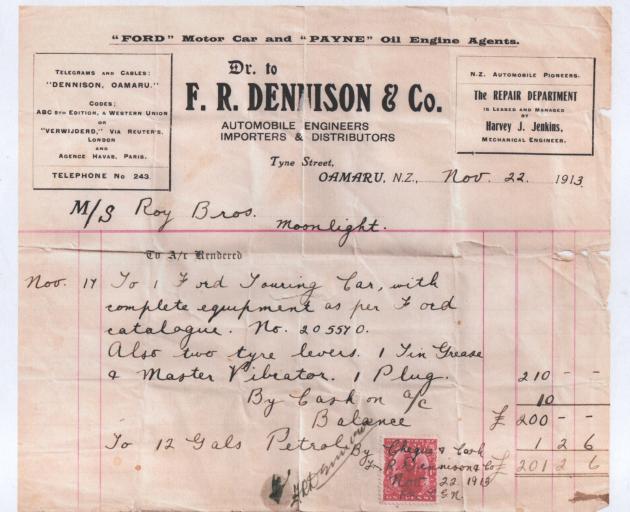 Twelve gallons of petrol for 1 2/6 on this 1913 invoice. According to Neil Roy that works out about 4.5c a litre. Not bad! PHOTO: SUPPLIED
"There are 12 gallons of petrol included, which would in all probability have been stored in four-gallon cans. This cost equates to almost 4.5 cents per litre.

"I've also attached an old photo of this car which, according to its number plate, was taken at least 15 years later."

Thanks Neil. I'm not sure anyone is going to be able to beat petrol at that price. The cheapest I recall was filling my old Triumph 2500TC with petrol in the early 1990s at the BP station on the corner of Dunedin's George St and Regent Rd, at a cost of 89.9c a litre. I also had to pay $1 for one of those lead substitute squirty things.

I hope you like the photo of the Intercity coach model.

I've done a lot of commuting back and forth to Christchurch this year and last, and have got to know the coach drivers pretty well.

Ritchies and Intercity driver Larry Markham made this intricate replica after I'd clocked up about 40,000km on board earlier this year. The real coaches were a bit bigger than this. PHOTO: CHRISTINE O'CONNOR
Ritchies and Intercity driver Larry Markham of Dunedin makes these models for the travel centres and presented me with this one when I'd reached about the 40,000km mark in trips between here and Christchurch. Needless to say it has been "driven" around the ODT office by various colleagues, accompanied by beeping and all sorts of awful engine noises.

I'd like to give a huge public thanks to Larry, and his Christchurch-based colleague Graeme Waghorn, for all the safe, punctual journeys I've had with them over the past nearly two years. It's been a real pleasure, guys.

The other photo today is one I found at home. I reckon it was taken in about 1991 when I was conservation and environment reporter here.

It's funny what stays with you. There I was standing just a couple of metres from a truly wonderful creature, yet I can't recall much about the albatross. However, I do recall the thin leather tie whipped over the shoulder of my paisley shirt by a howling nor'easter, the black Levi 501s and the suede black Doc Martens from London.

Superficial of me, I know, but I was just a callow 26-year-old, I guess.

The office I've been based in here is called Siberia for good reason. I'm sure I've mentioned it in the column. 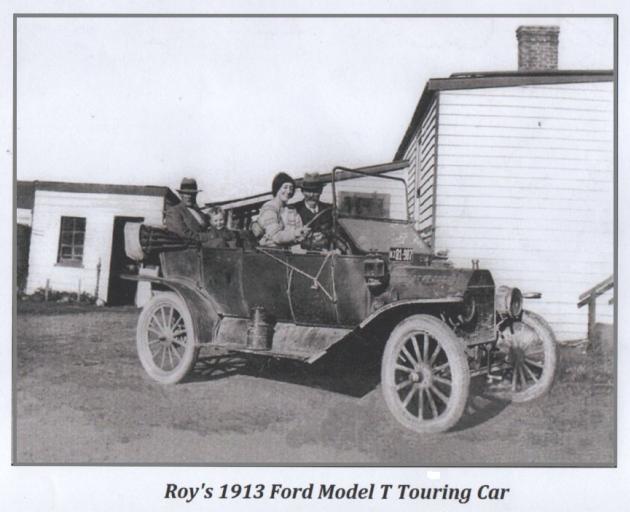 Neil Roy's grandfather's 1913 Model T Ford, taken about 1928. PHOTO: SUPPLIED
However, in recent months I've very much enjoyed sitting out in the newsroom in what has now become known as the "sunny north wing", soaking up the collegiality and the witty banter. On many of these occasions, my neighbour has been redoubtable reporter John Gibb, who is far and away the cleverest person with words I have met.

Sorry John, but I've got to mention three of your bon mots over the past year which still make me laugh hysterically.

1. On receiving a government document with tiny print: "I'd need an ant with an electron microscope to interpret this."

2. On talking about the worst fish-and-chip shop in Hull: "You could choose to fire the fish and chips out of an artillery gun, but there's no enemy you'd hate enough to do that to."

3. On the food with no apparent owner heating up in the microwave: "It seems to be an offering from the Marie Celeste catering service."

And while I'm still laughing, it's time to say goodbye.

There's bound to be things that I'll think, "damn, I wanted to mention that too". But I reckon enough is enough.

Be kind to each other.