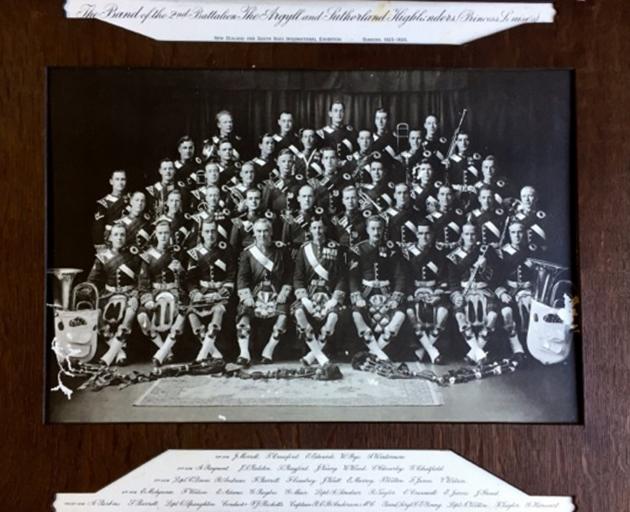 Everyone loves a good pipe band. I think. Anyway, allow me to introduce you to the Argyle and Sutherland Highlanders Pipe (and Brass?) Band, which may have had links to the 1925-26 New Zealand and South Seas Exhibition. More below. PHOTO: TAIERI HISTORICAL SOCIETY
Just a short column for you today. I seem to have picked up some bug or other that's going round the office and I've just popped in for a few hours. I feel like I want to go to sleep - though, as one of my colleagues said, that could of course just be middle age and general malaise.

Thanks for all the great spalapropisms and moonerisms you've sent in.

Chris Carey, of Palmerston, passes on this spoonerism.

"Several years back, a workmate had a small ding in his car and I asked him where he was getting it repaired.

"His response was he was taking it to Panel Street Castle Beaters."

Segueing seamlessly into the world of Mrs Malaprop, Tom Landreth, of Cromwell, offers this gem from his father's time as a sole teacher at a small country school:

"Dad had asked a class to write or prepare a talk about octopuses. One pupil told the class `an octopus has eight testicles which can be up to five feet long'."

How uncomfortable for them.

Kay Hannan, of Weston, emailed with one of her mother's most frequent malapropisms: "Don't cast nasturtiums at me."

That reminds me of my nana's version of rhododendrons - "rhodidandrums" - and not forgetting that wonderfully versatile fruit, "rhububb".

Back to the exhibition

The discussion of the huge New Zealand and South Seas Exhibition at Logan Park in 1925-26 has really resonated with quite a few readers.

"This is the Argyle & Sutherland Highlanders Pipe (and Brass?) Band, which we think might have been a/the guest band during this exhibition.

"No doubt someone out there knows the story behind this band's visit."

If anyone has more concrete information on their possible involvement, feel free to get in touch.

Jim Childerstone, of Hampden, wants to mention his experiences of rabbits and earthquakes.

"In the late 1940s, some of us at Arrow Primary School made a few shillings through ferreting rabbit warrens. Lenore Whyte found this on her bookshelf - a ``Photographic View Album'' of the Logan Park exhibition, a steal at 1/6. It's in very good condition. PHOTO: LENORE WHYTE
"That was done by placing nets over the multiple burrows. The tame ferrets then did their job, with the rabbits popping out into the nets.

"Us lads then dispatched them through neck pulling, gutted them and hung them out in pairs on a cross beam. This was in those days when we got 2/6 for a pair on collection by the freezer truck. I presume they ended up at the Dunedin factory for processing.

"Up to 40 pairs were often collected - not bad pocket money between four of us! A farm labourer's weekly wage at the time was between 3 and 4 pounds a week."

Jim says the September 4, 2010, magnitude 7.1 earthquake near Darfield "just about shook me out of bed in Hampden".

Despite that, "everything remained intact in our house and no damage reported by neighbours".

I'm a cyclist, and generally in favour of cycle lanes. But chopping down trees along Dunedin's one-way going north to provide something supposedly environmentally friendly seems somewhat crazy to me.

Again I'm reminded of Joni Mitchell's Big Yellow Taxi. For those of you who don't know it, look it up. Never a truer word spoken.

Hope you have a good weekend. See you on Monday.